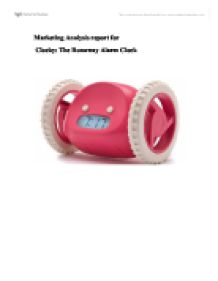 Marketing Analysis report for Clocky: The Runaway Alarm Clock Executive Summary: Few would deny that the first thing they do when the alarm clock goes off in the morning is hit that snooze button-and go right back to sleep. An ingenious creation by inventor and entrepreneur Gauri Nanda is aimed at making the alarm clock a little bit harder to ignore. The clock has a mind of its own, so to speak: after it goes off, if the user hits the snooze button, it literally jumps off the table, rolls away, and hides elsewhere in the room, forcing the user to get out of bed and find it when the alarm sounds again minutes later. Nanda came up with the product, dubbed "Clocky," as a graduate student at the Massachusetts Institute of Technology where she participated in the MIT Media's Lab's Object-Based Media Research Group. Born in Rochester Hills, Michigan, in 1980, she earned a B.S. from the University of Michigan and entered MIT's media arts and sciences program where she focused on electronics-embedded clothing. She completed her M.S. in 2005. Nanda created Clocky in 2004 when asked to create a practical product for an industrial design course. ...read more.

Meanwhile, consumers seem to be increasingly willing to pay a premium for design--witness the proliferation of iPods, Razr phones, and Design Within Reach stores. Revenue projections: 2007: $1 million 2008: $3 million 2009: $4 million Cash-flow picture: The Company broke even in February 2007, after only two months of sales, and Nanda expected to have cash flow of $650,000 in 2007. In 2008 she projected $2.1 million in cash flow and by 2009 $3 million. Competition Analysis: Table 1: Main Competitors Clocky's Advantage/Competitor's disadvantage Puzzle Alarm Clock 1. Humanizing technology trying to give clocky an appealing personality. 2. Puzzle alarm clock could be more irritating (In both cases you have to get up, but in case of Puzzle Alarn clock, you need to seek for several pieces(balls), that is irritating, when you are already on your feet. SleepSmart 1. SleepSmart could be less effective if you can't wake up even during your "light" stage. It doesn't make you standup and walk somewhere. 2. SleepSmart is less convenient in use (more comlex) since you need to use headband. 3. SleepSmart is expensive. It is better to position clocky in less expensive segment. Conventional alarm clock 1. Conventional alarm clock is not efficient (Snooze Button) 2. ...read more.

Since it's a standardized product it doesn't really physical contact with customers in order to make purchase decision. Promotion: Nanda gave over 50 radio interviews, including some with outlets such as National Public Radio and the British Broadcast Corp(BBC). Other notable media attention included print publications like Guardian UK, USA Today, New York Daily News, Chicago Tribune, the Boston Globe, the LA times, the New York Times and Reader's Digest. Nanda also began making appearances on TV programs, including the Discovery Channel's Daily Planet and Beyond Tomorrow, Fox News and CNN. After initial media attention, Nanda created website www.clocky.net After winning Ig Noble prize rgere was huge jump from 5000 to 35000 in number of viewers to her website. She also created a mailing list for further clocky development updates. Pricing: The variable costs of production for Clocky is $15. Adding other costs Shipping of $1, warehousing and packaging of $1, credit card processing fees of $1 and returns(15% of $18) of approximately $3, we have total variables equal to $21. Regualr alarm clock is priced at $10-$15. Puzzle alarm clock is priced at $50. Statistics suggested that the customers buying alarm-clocks tend to and are prepaired to pay more for an alarm-clock that meets their needs. So Nanda decided to set the price of clocky around $50. ?? ?? ?? ?? ...read more.