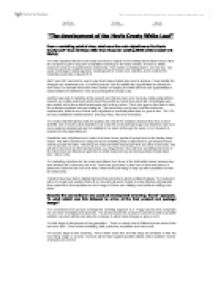 From a marketing point of view, what were the main objectives or the Hovis Crusty loaf? How did these differ from those for existing RHM white breads?

"The development of the Hovis Crusty White Loaf" From a marketing point of view, what were the main objectives or the Hovis Crusty loaf? How did these differ from those for existing RHM white breads? (15 Marks) The main objectives for the Hovis crusty loaf were to capture a new market; this in return should allow the company to gain a long term competitive advantage in the bread market. It needs to satisfy customer needs and requirements to achieve this. They wanted something that no one else has. This would meet larger market segments. Overall growth is Hovis's main objective, but to achieve this marketing would play a big part in it. SWOT and PEST can both be used to give them ideas of what they need to improve. These identify the strengths and weaknesses etc. of current products. Also it identifies the opportunities and threats for new ideas. For example where they have decided on keeping the white loaf but used opportunities to make it better and therefore a new product altogether (Crusty Loaf). Another large part of marketing is the research and this has been done by Hovis, mainly using primary research e.g. asking customers which bread they prefer and what they would like. Percentages were also worked out to show which breads were sold most and when. This in tern gave a clear idea of what the customers preferred and are looking for. This meant they can try and meet the customers requirements, which is one of there main objectives to eventually allow them to grow in size. The 4 P's are also essential for market research. (Product, Place, Price and Promotion). The crusty loafs that already exist are popular, but only at the weekends because they have a short shelf life. One of Hovis's other objectives Is to make the crusty loaf last longer and therefore meet even more customer requirements and be available to be eaten all through the week. ...read more.

What were the advantages and risks of the design approach taken by Cathy and her team for the development of Hovis Crusty loaf? When Cathy undertook the Hovis crusty loaf product in 1997 there were many advantages and risks associated with the development of the new bread. One of the first things that were under taken was a market research analysis of the current bread market to discover what were the needs of the consumer and showed the trends of bread brought. As a result of the research Cathy concluded that the crusty loaf would be a major opportunity to exploit the market by producing crusty bread that would last for up to four days and therefore last for most of a week a large advantage of producing the bread. One main problem that was encountered by Cathy would have been the budget in which to produce the loaf of which was �3 million, from which the whole process would need to be have undertaken. Also was the percentage increase in the market that was expected by the company. The construction of a design team made of various people heavily associated with bread making and the company was initialised which would be responsible for designing and the production of the bread. The key risks that the team discovered were that loaves of crusty bread all ready on the market suffered form the following problems; Loaves would dry out as moisture is lost to the atmosphere. Secondly, bread goes stale because of chemical reactions; with the starch converting from one form to another, however, a third problem would be maintaining the crusty nature of the loaf which was required for a minimum of four days, which is what was desired. With this in mind the team concluded that three areas were in need of improvements which were the recipe and ingredients; the production process itself and the packaging and storage conditions needed to keep the bread fresh and crusty for four days. ...read more.

This saved me reading the whole case study over and over again. All I had to do now was read the parts I had underlined as I knew they were the only bits I needed for the answering of the question. I then answered question one, using notes and a marketing book to help me. Sean Fry For this project we had an initial group meeting. In this we decided to divide the project up in to six parts. We then took a part each. I took question 2. Then when I had completed my question I emailed it to Dave Filmer who was compiling all the parts of the report David Willgress As a team we met a couple of times and we read through the case study together. We decided it would be best to each take a question and answer it. I answered question 3 and read through the case study making notes on all the parts relevant to my question which was about the organisational structure. I then wrote my answer using the notes I had made on the study and notes previously taken in a lecture. Keke Mallet My contribution to the team was to complete question 4 from the briefing sheet which we discussed as a group giving each other tasks to do to split the work load evenly and fairly amongst the group. I also contributed to the final construction of the report when it came to putting the whole report together. David Filmer and Jim Wicks We had a joint responsibility to give a report on how well the team worked as a whole and because of this, the decision was made to appoint David Filmer and Jim Wicks the leaders. So while referring to the leaders in the final report, this reverts to us too. I think the team worked well as a whole although there was a clash off alter-egos in the initial stages, described above in the storming stages. David Filmer Jim Wicks Sean Fry Kieren Clapham David Willgress Keke Mallet ...read more.