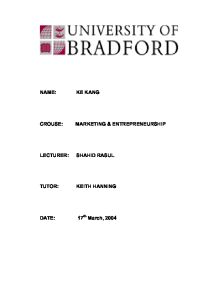 MATSUSHITA (1894 - 1989): one of history's greatest business leaders and the father of $75 billion Empire was revered in Japan with nearly as much respect and reverence as was the Emperor.

NAME: KE KANG CROUSE: MARKETING & ENTREPRENEURSHIP LECTURER: SHAHID RASUL TUTOR: KEITH HANNING DATE: 17th March, 2004 MATSUSHITA (1894 - 1989): one of history's greatest business leaders and the father of $75 billion Empire was revered in Japan with nearly as much respect and reverence as was the Emperor. He was not a great speaker. His voice was frail. He never displayed quick-silver intellect. And, even if he did, it was all too rare - never in public view. He never warmed his audience with hilarious anecdotes. But, he did what all great leaders do. He motivated large groups of individuals: to improve humanity; and, its very condition. When Matsushita died, in the spring of 1989, at the age of 94, he had become, in the words of the then US President, George Bush, Sr., "an inspiration to people around the world." His legacy was, indeed, daunting. For a man who had helped lead the Japanese economic revival, after World War II, through Panasonic and a host of other brands, the firm he founded, and supplied billions of people with household appliances and consumer electronics, Matsushita was nothing short of an inspirational role model - quite largely unknown beyond his native land. But, again, by the time of his death, few organisations, on the living planet, had more customers. His economic achievements exceeded, on some dimensions, those of the likes of Henry Ford, the more famous of entrepreneurs. ...read more.

His products not only selling within the nation but also export abroad. Entrepreneurs are risk-takers who trust their intuition and act on them. Taking risks can be small first steps, like placing your first ad in a mail-order publication. When he launched his lamps, no shops dare to accept his product but with his faith, he was taking risk to invest more in a new merchandising strategy. Entrepreneurs are usually honorable people who do business based on a handshake or a promise. They tend to form strong associations with others who share this work ethic. When Matsushita faced financial problem, he had never decreased employees payments but worked harder to override this hard period. As above, that entrepreneurs used of innovation to exploit or create change and opportunity for the purpose to make profit. Entrepreneurs are using different commercial opportunities and then exploiting them and this is why they are so valued in today's society. Like what Michael Porter (1990) said that 'Invention and entrepreneurship are at the heart of national advantage'. Innovation is an unpredictable and illusive thing. It is usually associated with ideas developed by people. It is often coming from people who made many marketing research and observation in the existing markets and change their way into different things. Innovation means renewal by application of new technologies, methods and procedures at the cutting edge of business. It related to many things like technology, product, process, service and so on. ...read more.

Matsushita never talked narrowly about maximising shareholder value as the proper goal of an enterprise. Although he did speak often about generating wealth, his overall theme song emphasised the psychological and spiritual aspects of being for the good of all people. Matsushita's first product was an attachment plug. The year: 1918. It was followed by the bullet-shaped bicycle lamp, a few years later. He launched his inexpensive Super Iron, in 1927; and, his first radio was developed in just three months, in 1931. Interestingly, Matsushita began his first business with his own savings, a savings of one hundred yen! Inside his two-room tenement house. The total space available for working and living, equalled 130 square feet. The rest is history. What made Matsushita so special? His own set of business principles for the corporation: service to the public; fairness and honesty; teamwork for a common cause; untiring effort for improvement; courtesy and humility; accord with natural laws; and, gratitude for blessings. They were, overall, Matsushita's Seven Commandments - all of them committed to certain ideals. His powerful ideas are about the roots of life-long learning. One can, he often told people, learn from any experience, and at any age. With ideals that are big and humanistic, Matsushita emphasised, one can conquer success and failure, learn from both, and continue to grow. Matsushita extraordinary life was a reflection of that outlook. It is a powerful testimony and rare resources for subsequent business founders and entrepreneurs. ...read more.