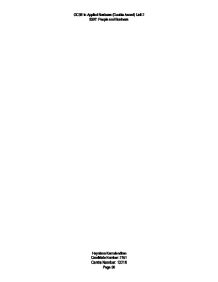 Shareholders/Owners (3 legged stool) ROLE: Shareholders are important stakeholders as they are part of the three legged stool approach. McDonalds therefore will aim to fulfil all expectations as they believe without shareholders McDonalds will not be successful. In the UK, McDonald's restaurants are either company owned or franchised. McDonalds only sell shares in the USA they do not have shareholders in the UK. However, shareholders would still be interested in McDonald's performance in the UK as changes in company reputation affects share price, profits and dividends. The way McDonalds operates in the UK also directly has a big effect on the organisations reputation worldwide. Shareholders are like a special case of owners and most probably behave like any other owner. They buy shares which allow the organisation to raise money. They take risks in the business, get the rewards in return. As the owners, shareholders have an interest in the company's financial performance. Actual and potential shareholders want to access profitability of investing in the business. They are keen to set the business in profit all the time. EXPECTATIONS: They want the business to do well. They want success for the business and they support it in achieving that success. They will expect McDonalds to act responsibly and in a politically correct way. If the business, for example was polluting the rivers, exploiting cheap labour overseas the shareholders and the newspapers would make their opinions clear. Shareholders expect to receive a good amount of net profit or their dividends. Dividends - a share of the profits which are paid out to shareholders. They wish the business to do successfully so that their share of property is worth more than the price they had bought it for. McDonalds do not sell shares in the UK only in US. INFLUENCE: Shareholders of McDonalds influence the company in many ways. Achieving to get a good reputation towards customers and thinking up ways to get more profit. ...read more.

They provide McDonalds with money to aid the running of the restaurant and expansion or to refurbish McDonald's premises. The government in some cases may offer grants usually in areas of high unemployment and economic deprivation. EXPECTATIONS: To make sure the business is successful so that McDonalds can pay back long-term loans. They expect to have an involvement in decision to how the money is spent at McDonalds and to receive regular payments from McDonalds. INFLUENCE: Helps McDonalds to enlarge their business and maintain higher success. They are a big influence as they are providing money for the business, which means that they are taking a risk, so should have a say in how it is spent. Meetings are set up between the bank and the company so that the bank can monitor and may be change what the business is doing. Financiers can increase charge on interest rates which means McDonalds have to pay more and therefore would make less profit. McDonalds would have to find a bank which does the right balance. Some banks do low interest but then offer a less of a good service therefore a right balance should be found. A bank can also influence McDonalds by the changing the repayment terms; the amount of time given for the money to be paid back in can be changed , which would affect how well the business has to work to get the money needed. Financiers are people like Barclays, Halifax, and HSBC etc. The disadvantage of financiers is that if a late payment is made the property would be seized by the bank. Companies like McDonalds pay for the building with ready cash which avoids interest pay. Financiers will look at the annually balance sheet to check if the company is in a stage to repay their loan. Financiers help the business, for example enlarging McDonalds so that the business can maintain further success and good reputation. Financiers can seize the business if payments are not given in and they give the start up capital for the business. ...read more.