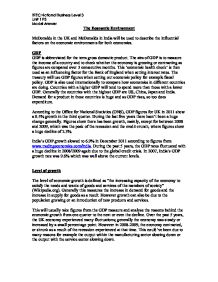 McDonalds in the UK and McDonalds in India will be used to describe the influential factors on the economic environments for both economies.

The Economic Environment McDonalds in the UK and McDonalds in India will be used to describe the influential factors on the economic environments for both economies. GDP GDP is abbreviated for the term gross domestic product. The aim of GDP is to measure the income of a country and to check whether the economy is growing or contracting as figures are compared over 3 consecutive months. This 'economic health check' is then used as an influencing factor for the Bank of England when setting interest rates. The treasury will use GDP figures when setting out economic policy for example fiscal policy. GDP is also used internationally to compare how economies in different countries are doing. Countries with a higher GDP will tend to spend more than those with a lower GDP. Generally the countries with the highest GDP are US, China, Japan and India. Demand for a product in these countries is huge and as GDP rises, so too does expenditure. According to the Office for National Statistics (ONS), GDP figures for UK in 2011 show a 0.5% growth in the third quarter. During the last five years there hasn't been a huge change generally. Figures show there has been growth, mainly, except for between 2008 and 2009, which was the peak of the recession and the credit crunch, where figures show a huge decline of 2.3%. ...read more.

If the Indian economy makes it harder for people to borrow money, then less consumer spending will take place and as a result this may curb inflation. Employment levels This measure is to do with the number of people who are able to work, in employment. A 0% rate of unemployment would mean that all people are employed and there isn't anyone who is able to and willing to work, not in employment. A report published by The guardian newspaper on the 16th November claims that UK currently has the highest unemployment rate since 1994 with 2.62 million people currently unemployed, or 8.3% if expressed as a percentage. A report published in the Daily Mail in October 2011 also claimed that unemployment figures show a 'surge to their highest in 17 years'. The unemployment rate for India was last reported as 9.4% according to www.tradingeconomics.com However, for the previous 5 years unemployment averaged at 7.2%. This means that if the current trend was to continue, then unemployment would be on the increase. Consumer spending Consumer spending is simply about how much money families are ploughing into the economy by purchasing goods and services. A report in the guardian newspaper in May 2009 claimed that 'consumer spending falls at fastest rate since 1980'. A report published by The Telegraph in December 2011 claims that the UK economy has been 'held back by weak consumer spending'. ...read more.

No one wants to shop in a supermarket where the staff are unhappy, so keeping their staff happy adds to their customers and therefore their growth. They also wish to retain their shareholders, these are the people that keep Tesco going from the top end. Keeping these people happy is primarily by keeping money going into their pockets. This too is done by retaining loyal customers and opening new stores, which are also beneficial to customers. All of these combined are great to keep their custom base but also great ways to keep their profits rising. More profits always mean more growth and therefore a more successful company. Their other objective that is to create value for customers and earn their lifetime loyalty. This is done by splitting this objective into the 4 P's. These are Product - having the right product range for the customers. This differs from store to store and area to area. Price - keeping their prices competitive. Place - accessible locations for customers. Public - thinking of their public. Their corporate and social responsibility is spoken about by their PR team frequently and they do give to charity and the local community out of their profits. Tesco can see buying patterns from their Clubcard information and this gives them the insight into what people want and what is in demand which helps achieve these customer led goals. ?? ?? ?? ?? BTEC National Business Level 3 Unit 1 P5 Model Answer ...read more.