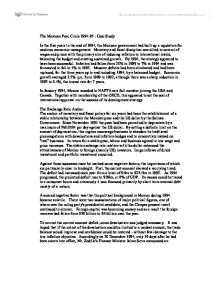 The Mexican Peso Crisis 1994-95 : Case Study In the five years to the end of 1994, the Mexican government had built up a reputation for cautious economic management. Monetary and fiscal discipline was allied to control of wages and prices with the primary aim of reducing inflation to international levels, balancing the budget and creating sustained growth. By 1994, the strategy appeared to have been successful. Inflation had fallen from 20% in 1989 to 7% in 1994 and was forecasted to fall to 4% in 1995. Massive deficits had been eliminated and had been replaced, for the three years up to and including 1994, by a balanced budget. Economic growth averaged 3.5% p.a. from 1989 to 1992, although there was a sharp reduction in 1993 to 0.4%, the lowest rate for 7 years. In January 1994, Mexico acceded to NAFTA as a full member joining the USA and Canada. Together with membership of the OECD, this appeared to set the seal of international approval on the success of its development strategy. The Exchange Rate Anchor The anchor of monetary and fiscal policy for six years had been the establishment of a stable relationship between the Mexican peso and the US dollar by the Salinas Government. ...read more.

Accordingly on 20 December 1994, only 19 days after he had been sworn into office, Mr. Zedillo's Finance Minister Jaime Serra announced an immediate 12.7% devaluation of the Peso and the continuation of the crawling devaluation of Ps0.0004 per day. Aftermath of Devaluation The devaluation worked out disastrously wrong. Instead of reassuring markets that the re-alignment was a once-off adjustment, it aroused fears of further and deeper devaluations. The peso proved impossible to support at the new level. By March 1995 it had traded at over 7 pesos to the dollar, a depreciation of over 100% on its level at the outbreak of the crisi s in December. Domestic short term interest rates rose to 42% by January 1995 and the stock market (ZPC) index, which in the past had been butressed by massive inflows of money from foreign pension, investment and mutual funds, dropped 23%. A US investor saw a massive decline in the dollar value of a stock market investment in Mexico and was going to be very hard to entice back to the market. ...read more.

This forced a much weaker peso - and by extension a much higher inflation rate - than was objectively warranted by fundamentals. Strong "contagion effects" were evident in other South American and Asian markets, engendered by these same irrational market movements. Conclusion Whichever view is correct, it seems generally agreed that inflation: is set to rise from 7% in 1994 to as much as 45% or more in 1995. Investor confidence in Mexico has been dealt a severe blow. Another effect of devaluation was the severe impact of increased import and financing costs on the many foreign companies which had decided to establish in Mexico following the NAFTA Agreement. The depreciation of the peso has damaged trade, as theory would lead one to expect, and it could have created difficulties for NAFTA. Certainly such wild exchange rate fluctuations are not conducive to a healthy growth of trade and factor exchange. Fears have been voiced that the painfully built-up consensus in favour of competition, macro-stability and openness would also be undermined. Certainly it will be re-thought, but the Mexican government appears to be committed to continuance of a reformist, outward-looking strategy. Sources: R. Dornbusch and A. Weber " Mexico: Stabilisation, Reform and No Growth" Brookings Papers on Economic Activity 253-316 1994 ...read more.