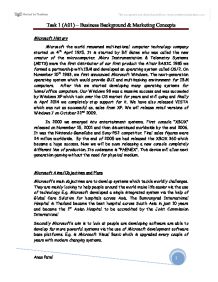 Microsoft History Microsoft the world renowned multinational computer technology company started on 4th April 1975. It is started by Bill Gates who was called the new creator of the microcomputer. Micro Instrumentation & Telemetry Systems (MITS) were the first distributer of our first product the Altair BASIC. 1985 we formed a partnership with IBM and developed an operating system called OS/2. On November 10th 1983, we first announced Microsoft Windows, The next-generation operating system which would provide GUI and multitasking environment for IBM computers. After this we started developing many operating systems for home/office computers. Our Windows 98 was a massive success and was succeeded by Windows XP which took over the OS market for years and still going and finally in April 2014 we completely stop support for it. We have also released VISTA which was not as successful as, sales from XP. We will release retail versions of Windows 7 on October 22nd 2009. In 2000 we emerged into entertainment systems. First console "XBOX" released on November 15, 2001 and then discontinued worldwide by the end 2006. It was the Nintendo GameCube and Sony PS2 competitor. Final sales figures were 24 million worldwide. By the end of 2005 we had released the XBOX 360 which became a huge success. Now we will be soon releasing a new console completely different line of production. Its codename is "PHENEX". This device will allow next generation gaming without the need for physical medium. Microsoft Aims/Objectives and Plans Microsoft's main objectives are to develop systems which tackle worldly challenges. They are mainly looking to help people around the world make life easier via the use of technology. E.g. Microsoft developed a single integrated system via the help of Global Care Solution for hospitals across Asia. The Bumrungrad International Hospital in Thailand became the best hospital across South Asia in just 10 years and became the 1st Asian Hospital to be accredited by the Joint Commission International Secondly Microsoft's aim is to look at people are developing software are able to develop far more powerful systems via the use of Microsoft development software base platforms. ...read more.

The Admin/ICT and marketing are related as Admin/ICT is making sure that all the departments are communicating well together and marketing will need to know this as they will need communicate with other department. Good communication means that correct information is provided and marketing can meet customer needs. Other department's communication Marketing Mix Marketing mix generally known as the four P's describes the strategic position of a product in the marketplace. The four Ps are a set of tactical marketing tools which work together to allow a business/company to achieve its aims and objectives. The idea of marketing mix originally came about in 1948 when James Culliton said "that a marketing decision should be a result of something similar to a recipe". This idea was taken a step further by Neil Borden in 1953 in his American Marketing Association presidential address and coined the term marketing mix. Major market player E. Jerome McCarthy proposed the four P's classification in 1960 which since then was widely used. The fours P's are Product, Price, Promotion and Place. 1. Product: An item/product can be a tangible or intangible item. These are mass produced or manufacture on a large scale with a specific volume of units. E.g. quite well known mass produced item could be pens, paper, etc. example of less known mass produced items could be operating systems. When a product needs to be made and released product decision need to be made. These decisions are: * Product & Service Classification System * The Product Life Cycle * Introduction to product * Boston Matrix (Growth/Share) * Product Value Analysis The product & service classification system is deciding what is it. * Is it a convenience good - little effort relatively effectively inexpensive * Shopping goods - DIY equipment, more expensive less usage. * Speciality goods - Extensive research e.g. Jewellery, gourmet food * Unsought goods - Double glazing * Industrial goods - Specialist goods only available to businesses/firms * Installations - Goods requiring installation such as industrial market goods - plants and machinery * Accessories - Maintenance and office equipment. ...read more.

It's a smaller segment of a bigger market. Due to being specific and not mass it will have a tendency to get less sales, therefore higher price is charged to get profit. This works because people will be willing to pay more as it's specific. It's also easier to run a niche market as there is less competitions. Example of niche market is lobster, Rolls Royce, etc. There are many reasons why niche market is started has low capital, low costs, have highly specialization, and the characteristics of target market needs customize and specialize products or services. The advantages of niche market is become specialize and has strong brand image. Microsoft is going to release a new entertainment device sometime next year. The product will be called "Stroxbox". Its codename as mentioned before is "PHENEX". This box will simply allow users to connect to the net using 1 GB broadband lines connecting directly to our server. The box provides gaming services as well as entertainment so it will allow user to connect to our server and play any video game and music + video. The box will be 13"(W) x 4"(H) x 8"(L) and just weighting at 2.5 Kg. The box itself will cost around �300 and then when market share is achieved it will be lower down to �150. There will also be monthly charge of �10 or �100 for a year. The objective of this product is to take leadership the entertainment industry and revolutionise the console industry. This product will be completely off the current hardware lines and a new line of products will be started based on this. The product will in a way fit in with our current product portfolio as Microsoft has already specialised in entertainment products such as webcams and gaming products such as Xbox's. The new product that I will be proposing will integrate the entertainment side off it such as watching videos, listening to music, etc. On the other hand it will also integrate gaming side of it. ?? ?? ?? ?? Task 1 (A01) - Business Background & Marketing Concepts Anas Patel ...read more.