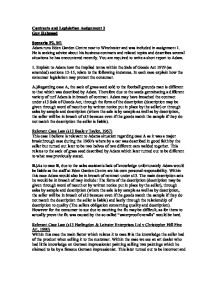 Contracts and Legislation Assignment 2 Guy Habgood Scenario P2, M1 Adam runs Eden Garden Centre near to Winchester and was included in assignment 1. He is seeking advice about his business contracts and related topics and describes several situations he has encountered recently. You are required to write a short report to Adam. 1. Explain to Adam how the Implied terms within the Sale of Goods Act 1979 (as amended) sections 12-15, relate to the following instances. In each case explain how the consumer legislation may protect the consumer. A.)Regarding case A, the sack of grass seed sold to the football grounds man is different to that which was described by Adam. Therefore due to the seeds germinating a different variety of turf Adam is in breach of contract. Adam may have breached the contract under s13 Sale of Goods Act, through the form of the description (description may be given through word of mouth or by written notice put in place by the seller) or through sales by sample and description (where the sale is by sample as well as by description, the seller will be in breach of s13 because even if the goods match the sample if they do not match the description the seller is liable). Relevant Case Law (s13 Beale v Taylor, 1967) This case I believe is relevant to Adams situation regarding case A as it was a major breakthrough case during the 1960's where by a car was described in good faith by the seller but turned out later to be two halves of two different cars welded together. This relates to the sack of grass seed described by Adam which later turned out to be different to what was previously stated. B.)As to case B, due to the sales assistants lack of knowledge unfortunately Adam would be liable as the staff at Eden Garden Centre are his own personal responsibility. ...read more.

* s15 the goods must correspond with their samples * Unfair contract terms act 1977 (4 correspond to any sample which has been provided.) Below I have gone into more detail regarding these pieces of statutory legislation. S13 Sales by Sample and Description Under s13 Bobby Smith may have grounds to sue as sample and description he chose did not turn out to be the sample he received. The seller, in this case Eden Nurseries will be in breach of s13. This is because even though the trees matched the sample they did not match the description which stated that they where a "rare apple tree" on these grounds Eden Nurseries is in breach of contract and Bobby would have grounds to sue. S13 the Relationship of Description to Quality In the case of Bobby Smith the relationship of the description compared to the quality is of a poor standard. The description given is incorrect as the trees are later found not to be as rare as described and the trees are diseased indicating a low quality. It is the obligation of Eden Nurseries to supply an acceptable standard of quality to its consumers as well as to correctly state the description of the trees. Unfortunately there has been a failure to do so and Eden Nurseries are therefore in breach of contract under s13 The Relationship of Description to Quality act. Beale v Taylor (1967) Bobby Smith's situation is greatly reflected in the case of Beale v Taylor (1967). Where by a car was described in good faith by the seller as a 1961 Triumph Herald convertible, but turned out later to be two halves of two different cars welded together. This is similar to Bobby's situation as at the time of purchase the sample (whether it was a sample tree or in the case of Beale v Taylor most likely a test drive) ...read more.

which it is also not. Consumer Protection Act, 1987 The Consumer Protection Act is the most important line of defence for Bill Weeks when building his claim as it covers injuries caused to consumers through defective goods. The Consumer Protection act is used when businesses can not be relied upon to regulate themselves. This includes the businesses activities when dealing with employees, other firms and in this case Bill Weeks. Even if Eden Nurseries expressly excluded liability for damages howsoever caused Bill weeks could use the Consumer Protection Act to remove their clause. This would be possible as under the act it clearly states that a firm supplying defective goods would be liable for any injuries caused when using the equipment. Heart v Brendling Kitchen-Wares, 1984 A relevant case to back this up would be that of Heart v Brendling Kitchen-Wares, 1984. Within this case the consumer purchased a toaster which was deemed to be of the highest quality by the shop clerk. Subsequently the toaster was found to faulty and resulted in the consumer being electrocuted. The argument was that Brendling Kitchen-Wares had no responsibility over the product as they had clauses in place stating that Brendling Kitchen-Wares where not liable for any damages. However the clause was deleted as Brendling Kitchen-Wares where told they were responsible for all products sold within the shop. It was irrelevant whether they had control over the manufacture or design of their products. In conclusion along with the relevant case law I believe Bill Weeks has relevant grounds to overthrow Eden Nurseries clause as it does not abide by consumer protection legislation. Eden Nurseries are in breach of contract under a number of Consumer Protection Acts by which Bill Weeks could claim compensation. By using the relevant information I have provided above Bill Weeks may be able to build a strong case. However he should consider taking advice from the Office of Fair Trading in order to come to a firm conclusion on whether to seek compensation, ...read more.