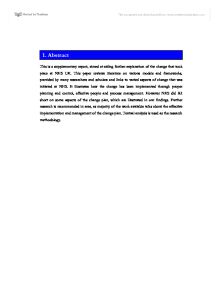 This is a supplementary report, aimed at aiding further explanation of the change that took place at NHS UK. This paper reviews literature on various models and frameworks, provided by many researchers and scholars and links to varied aspects of change that was initiated at NHS. It illustrates how the change has been implemented through proper planning and control, effective people and process management. However NHS did fall short on some aspects of the change plan, which are illustrated in our findings. Further research is recommended in area, as majority of the work available talks about the effective implementation and management of the change plan. Textual analysis is used as the research methodology. 1 2.1 The National Health Service, UK Since its launch 60 years ago, the NHS has grown to become the world's largest publicly funded health service. It is also one of the most efficient, most egalitarian and most comprehensive. The NHS was born out of a long-held ideal that good healthcare should be available to all, regardless of wealth. At its launch by the then minister of health, Aneurin Bevan, on July 5 1948, it had at its heart three core principles: * that it meet the needs of everyone, * that it be free at the point of delivery, * and that it be based on clinical need, not ability to pay 2.2 The Change Plan These three principles have guided the development of the NHS over more than half a century and remain. However, in July 2000, a full-scale modernisation programme was launched and new principles added. These require that: * The NHS will provide a comprehensive range of services * The NHS will shape its services around the needs and preferences of individual patients, their families and their carers * The NHS will respond to the different needs of different populations * The NHS will work continuously to improve the quality of services and to minimise errors * The NHS will support and value its staff * ...read more.

In the context of NHS managers were struggling to deliver a transformational change. In trusts, the modern challenge must be based on managing resources to develop new services or partnerships and creating an environment in which stakeholders can contribute to organizational goals and are given discretion to achieve them. In NHS, most people were willing to follow and involve themselves in something when they feel a part of it. There was also a movement to invite private companies to manage the NHS services which proved to be an unsuccessful venture, and caused division within the organization. In the concept of the managerial role, the main priority is the accomplishment of the organizational goals. The private companies have little, if any, familiarity with the goals of the NHS, and as a result were not able to deliver services in a patient focused direction. Recommendations: We recommend a transformational leadership in NHS. Again coming back to the definition of transformational leader, it suggests a leader who treats relationships with followers in terms of motivation and commitment, influencing and inspiring followers to give more than mere compliance to improve organizational performance (Buchanan, Huczynski, 2007). Transformational leadership model (Source: Thornborrow, 2008) Why need a transformational leader? The detailed review on why this leadership should be adopted in NHS is given below. The leader's task is always to manage difference and diversity and from those things to produce uniformity in terms of product and excellence in terms of service (Viney, 1997).Top managers should build consensus and motivate stakeholders to achieve the above in business. They should have an informal process of leadership, vision building, team building, communicating and commitment building. The excellent work of Synder and Graves (1994) on leadership and vision building defines vision and its delivery as a target towards which the leader aims their energy and resources. The constant presence of the vision keeps the leader moving despite the various forces for resistance; fear of failure; emotional hardships such as the negative responses from superiors, peers and employees or the real hardships such as the practical difficulties or problems in the industry. ...read more.

As noticed in the change plans of NHS, innovators and policy makers form the 'star teams' to drive the implementation of the project. However we believe that involving a representative from every functional department and creating sub teams with representatives from every level of the hierarchical structure ensures that concerns, problems and suggestions of all are kept in mind while preparing a change plan. The next factor being commitment. Commitment can be solicited through active and visible participation from the most senior leaders, and creating enthusiasm in the staff. This can be achieved only through communicating the reason for change to the staff, and getting them to believe that it is worthwhile, as they are the ones who will be operating with the changed systems and structures on a daily basis. NHS change initiative can be characterized by low commitment and communication from the senior leaders, leading to low levels of commitment of staff. The top management need to develop effective top down communication and change the hierarchical thinking, as the existing relationship between the senior leaders and the doctors is more like a a viceroy and a village farmer from India. (Bevan, 2003) The final dimension effecting change is effort. Effort refers to the amount of work required from the staff over and above the work that they perform in their routines. According to (Sirikin et al,2005), if the increased work pressure is less than 10%, the project scores 1 point, which keeps increasing with the percentage of pressure. The lowest score instates a higher probability of the project succeeding. NHS has a tendency to launch major change, simultaneously, not keeping in mind that the regular busy operations also need to be carried out, creating extra responsibility for the staff. Also the de-layering strategy increased the operational work load. Managers at the NHS need to analyze the percentage of increased pressures on the staff to analyze the probability of success. The question at this juncture is whether change in such a large organization can be implemented effectively and fast enough to keep the staff motivated and committed. 7. ...read more.