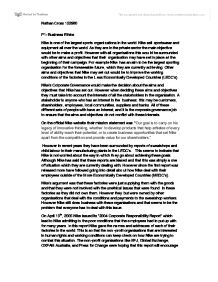 P1- Business Ethics Nike is one of the largest sports organisations in the world. Nike sell sportswear and equipment all over the world. As they are in the private sector the main objective would be to make a profit. However with all organisations this would be surrounded with other aims and objectives that their organisation may have set in place at the beginning of their campaign. For example Nike has an aim to be the largest sporting organisation for the foreseeable future, which they are currently achieving. Other aims and objectives that Nike may set out would be to improve the working conditions of the factories in the Less Economically Developed Countries (LEDC's). Nike's Corporate Governance would make the decision about the aims and objectives that Nike has set out. However when deciding these aims and objectives they must take into account the interests of all the stakeholders in the organisation. A stakeholder is anyone who has an interest in the business; this may be customers, shareholders, employees, local communities, suppliers and banks. All of these different sets of people with have an interest, and it is the corporate governance job to ensure that the aims and objectives do not conflict with these interests. ...read more.

Nike has spent a lot of time improving the way they treat these workers in LEDC's. They have improved the conditions in their factories and raised the amount that they pay their workers. However some of this was forced on Nike since The National Committee has introduced an anti-sweatshop legislation. This legislation meant that Nike has to respect human rights by prohibiting the import, sale or export or sweatshop goods in the US. Goods that are made under conditions that does not meet with the standards are not allowed to be transported. The main points in this legislation is that there is no child labour, no forced labour, freedom to form associations, right to organise and bargain collectively and the right to decent working conditions. Since the debate Nike have received an award for one of the World's Most Ethical Companies for 2009. Other ethical issues that have affected Nike are the global warming effect. Nike have been researching different methods that will allow them to cut down on their greenhouse emissions across their operations, incorporating sustainability in the design of their products and attempting to decrease the total footprint their company gives out. Nike has a target to transform all of their factories into environment friendly areas by 2015. ...read more.

Although Nike have been awarded as one of the most ethical companies of 2009 there is still a lot of promotional activities that they can use to increase the awareness of Nike's combat against Sweatshops and the supply of their products. Nike's other aims and objectives to be one of the largest sport organisations in the foreseeable future and improving the conditions in their factories would have been positively affected by the changes Nike have made. This is because there would be more interest from possible shareholders which would help Nike to increase their overall size of the organisations. I believe that overall Nike have had one of the largest impacts on the ethical issues with sweatshops and child labour in 2009. They were the first sports organisation to give the names and addresses of all the factories that they receive products from. This has allowed the non profit organisations to check up on these factories to ensure that the working conditions have improved and all laws have been taken into account when employing staff for the job. Nike has already received the award for one of the most ethical companies of 2009. All of these reasons are why I believe Nike should receive the Ethical Company of the year award. ...read more.