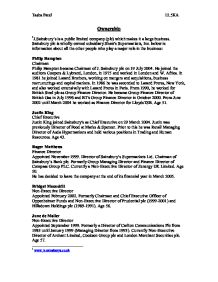 Ownership 1J.Sainsbury's is a public limited company (plc) which makes it a large business. Sainsbury plc is wholly-owned subsidiary Shaw's Supermarkets, Inc. below is information about all the other people who play a major role in the business: Philip Hampton Chairman Philip Hampton became Chairman of J. Sainsbury plc on 19 July 2004. He joined the auditors Coopers & Lybrand, London, in 1975 and worked in London and W. Africa. In 1981 he joined Lazard Brothers, working on mergers and acquisitions, business restructurings and capital markets. In 1986 he was seconded to Lazard Freres, New York, and also worked extensively with Lazard Freres in Paris. From 1990, he worked for British Steel plc as Group Finance Director. He became Group Finance Director of British Gas in July 1996 and BT's Group Finance Director in October 2000. From June 2002 until March 2004 he worked as Finance Director for LloydsTSB. Age 51. Justin King Chief Executive Justin King joined Sainsbury's as Chief Executive on 29 March 2004. Justin was previously Director of Food at Marks & Spencer. Prior to this he was Retail Managing Director of Asda Hypermarkets and held various positions in Trading and Human Resources. Age 43. Roger Matthews Finance Director Appointed November 1999. Director of Sainsbury's Supermarkets Ltd. Chairman of Sainsbury's Bank plc. Formerly Group Managing Director and Finance Director of Compass Group PLC. ...read more.

also it is a benefit for businesses that they are able to raise capital more easily under the protection of limited liability. This is good for sainsburys because the owners don't put at risk everything, they just put at risk their money. The disadvantages of this type of ownership are: * A legal document needed * If on a bad day a lot of people sold there shares they would go in loss this means it is a risky business. * Costly to establish * Accounts must be published. Sainsburys must publish their accounts because the public can see whether the company is doing well or not, so people can choose if they don't want their share * Risk of takeover by other firms buying shares on the stock exchange. Sainsburys ownership can be changed quickly because other companies buying shares can achieve takeover bids. Profit is distributed by shareholders receiving a dividend, dividend could depend on type of shares. Here are the other types of ownerships: > Sole trader- these are businesses owned by a single person, like a window cleaner or a corner shop. The advantages of this type of business is that the person gets to keep all the profit, they also get to make all the decisions as well as be there own boss. Another advantage is that it is one of the easiest businesses to set-up. ...read more.

Examples of a partnership are doctors, solicitors and dentists. Profit is distributed by sharing between the partners. The advantages are that you can share ideas, each person is specialised which makes it easier to raise finance, each person contributes. Disadvantages are that you have to draw up a deed of part, this costs money and also profits and losses are shared. Private limited company- this is similar to public limited company except the shares are not sold on a stock market, shares are only sold to family and friends. The advantages are that it is easy to raise finance. The disadvantages are that the ownership is shared, profits are shared. A legal document is also needed (memorandum and articles) and it is more expensive. The profit is distributed by shareholders receiving a dividend and then managing director(s) decide how much dividend is received. Franchise - are like hiring out. Or buying a store of a company is like saying your buying one of their franchises. The advantages are that it is already a well established business and advertising is done for you. Also the company it self gets to expand, for less of their own investment which means less risk; this is because the person buying the franchise has to put more money in than the actual company it self. Profit is distributed by franchisee keeping the profits after paying royality to franchisor. 1 www.ja.sainsburys.co.uk 2 www.J.Saisnburys.co.uk 3 http://www.j-sainsbury.co.uk/files/pdf/company_profile.pdf ?? ?? ?? ?? Tasha Patel 12.5KA ...read more.