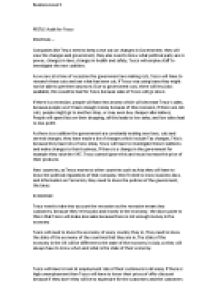 PESTLE audits for Tesco and the NHS

﻿Business Level 3 PESTLE Audit for Tesco POLITICAL ? Companies like Tesco need to keep a eye out on changes in Government, they will view the changes and government, they also need to know what political party are in power, changes in laws, changes in health and safety, Tesco will employ staff to investigate the new coalition. As we are at a time of recession the government are making cuts, Tesco will have to research these cuts and see what has been cut, If Tesco was using loans they might not be able to get them anymore, Due to government cuts, there will less Jobs available, this would be bad for Tesco because sales of Tesco will go down. If there is a recession, people will have less money which will decrease Tesco?s sales, because people won?t have enough money because of this recession, If there are Job cuts, people might go to another shop, or may even buy cheaper alternatives, People will spend less on their shopping, all this leads to low sales, and low sales lead to less profit. As there is a coalition the government are constantly making new laws, cuts and several changes, they have made a lot of changes which include Tax changes, This is because they have lots of new ideas, Tesco will have to investigate these Coalitions and ...read more.

Tesco need to understand that they need to charge customers extra for the VAT, so they can pay the government the tax or Tesco will have to pay it from their own pockets. ENVIROMENTAL Packing is so important to supermarkets; on their own packaging they make sure they have their Logo?s, Colours and Slogans. It?s a legal requirement for the ingredients to listed when selling food products to let customers know exactly what they are eating E.g. Salt Extracts. They also use packaging to protect the goods and also keep them fresh. Tesco must not leave their waste lying around, they must recycle or dispose of their waste correctly, If they do not do this they could be breaking health laws because their store will be unclean and you must keep your store clean and up to a good standard so it don?t affect the customers health. Tesco understand the importance of recycling, they will recycle all their cardboard boxes and materials which can be recycled. They also recycle within their customers as Tesco have different coloured boxes outside their stores which they use to put waste that can be recycled. PESTLE Audit for the NHS POLITICAL The NHS will need to keep an eye out in changes in the government because they are owned by the government and also follow changes that they put across ...read more.

The NHS need to investigate their waiting lists because if they are making their customers wait for to long the customers could get annoyed, the NHS will need to improve on their waiting times so their customers have are happy with their service without waiting a very long time for it. ENVIROMENTAL The NHS need to investigate health issues because if the hospital is unhealthy and unclean, there is a bigger risk of infection to the customers who are staying there, so the NHS must investigate their health issues and fix them before its to late for their customers. The NHS will also need to dispose of their waste using the correct method, either by using bins, or recycling their waste if it can be recycled, if the NHS does not get rid of this waste their hospital would be unclean and unfit for service, NHS has a lot of waste such as needles and things like bags, which they must dispose of correctly because they leave them lying around then someone could use them and get seriously ill. They have to look after their ward?s in the hospital and keep them clean, they have to make sure there are no super-bugs in the hospital for people to catch, the NHS will have to put adults and children in different wards from each other to prevent diseases, infections and bugs being passed to each other, the ward?s must always be clean to prevent illnesses. ...read more.