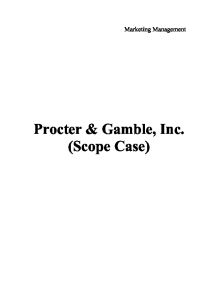 Marketing Management Procter & Gamble, Inc. (Scope Case) Situation The mouthwash market was developed by Warner-Lambert, who established Listerine. It dominated the industry and was positioned as a germ-killing mouthwash that eliminated bad breath. In 1967, however, Proctor & Gamble introduced Scope, which took over as leader in the industry in Canada with its bad breath fighting and better tasting position in the industry. In 1977, Listerine tried directly competing with Scope with their Listermint mouthwash, with the same characteristics as Scope, and achieved 12% of the market share. But, the major competitor for Scope was introduced in 1988 by Plax made by Pfizer, Inc. Before Plax, most mouthwash brands were positioned as freshening breath and/or killing germs. Plax innovatively positioned themselves as reducing plaque and have been increasing their market share since their introduction. Listerine is also a major player and both Listerine and Plax have achieved a higher rate of market share growth than Scope between '88 and '90. (APPENDIX A) APPENDIX A. Growth Rate % of units sold (Scope from 8.1%, 2.7%) (Listerine 12.7%, 8.2%) (Plax 981%, 4.9%) Problem Identification The problem in the Procter and Gamble, Inc. Scope case can be defined in a question: How can Scope retain its brand image to loyal consumers of having great tasting, bad breath reducing qualities, but at the same time increase its market share in this increasingly competitive and maturing market. Specifically, with the new threat of Plax and Listerine increasing their market share and positioning their products as having plaque/germ reducing qualities, Scope has to take action to keep their current customers, acquire new ones, and seize others from the competition. ...read more.

(Appendix D) Appendix C. Units Sold Appendix D. Advertising Expenditures and # of weeks on air. Weaknesses: * Inferior brand perception from users and nonusers * No seals of approval from ADA and CDA * Not positioned as germ-fighting/plaque reducing Brand users of Scope perceive many attributes below average, such as removing plaque, healthier teeth and gums, preventing colds, cleaning your mouth well, and being recommended by doctors/dentist. There's also no seals of approval by ADA or CDA, and therefore difficult for them to be seen as germ-fighting/plaque reducing. This may also be a reason why the scoring is low in the health benefit attributes of the brand. Opportunities: * Increase Scope sales in drugstores * Line extension * Seals of approval * Position differently * Increase usage of Scope * Increase ad exposure 42% of mouthwash sales in food stores are from Scope, and only 27% from drugstores, Furthermore, 65% of all mouthwash is sold in drugstores and 35% in food stores. This shows an opportunity where Scope can try to increase sales in drugstores. They can also extend their line or try to introduce new products, and position them against competition. They can also help increase sales by getting seals of approval from the ADA and CDA, to increase their credibility. The GRP ratings to weeks on air show that our advertisements are not as effective as Listerine however our weeks on air is more substantial than our competitions.(Kerin 212). ...read more.

X 181,500 total units)/440,000 current units). Contingencies If implementing the chosen alternatives doesn't work in meeting its objectives within a few years, Scope can focus more on distribution, advertising and promotional tactics for increasing sales in drug stores. 42% of mouthwash sales in food stores are from Scope, and only 27% from drugstores. Furthermore, 65% of all mouthwash is sold in drugstores and 35% in food stores. Promotions, coupons, incentives, and shelf placement, and other distribution methods can be used to increase sales activities in drugstores. If contingency plan doesn't work, then Scope may have to reinvent themselves in the market by either branding new products with or without the Scope name to compete with the current market. This may or may not include keeping their current image and position of a great tasting, bad-breath fighting. Scope may have a name that is so associated with their original product that perceptions from old and new customers won't shift. In this case, they may have to brand a new name and position to keep up in the industry in the long-run. The reason why this is a last resort is that the risk is way too high, with heavy advertising costs, in which Scope is already spending $1.7 million in 1990. Also, even with a great strategy, implementing new and/or innovative product(s) would increase costs for advertising, packaging, research and development, and all other associated costs, but would still not guarantee that the product will be successful. Scope may also try to use some of these strategies to increase market share in the US more than just adding the ADA seal, as well. ...read more.