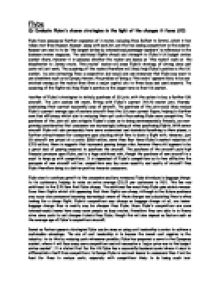 Q: Evaluate Flybe's chosen strategies in the light of the changes it faces

Flybe Q: Evaluate Flybe's chosen strategies in the light of the changes it faces (20) Flybe have announced further expansion of 3 routes, including from Belfast to Bristol, which it has taken over from Ryanair. Ryanair, along with eastJet, are the two leading competitors in the makret; Ryanair are said to to be 'the largest airline by international passenger numbers' in reference to the business review magazine. The additional flights should add strength to Flybe's UK budget airline market share. However it is unknown whether the routes are known as 'thin routes' such as the Manchester to Jersey route; 'thin routes' routes will mean Flybe's strategy of driving down unit costs will not work. The acquiring of the routes therefore will likely help Flybe's position in the UK market, by also detracting from a competitor, but would also use resources that Flybe may want to use elsewhere such as in Europe. ...read more.

However, just 35 aircraft are priced at a costly �850 million, more than four times Flybe's market valuation of �215 million; there is suggests that increased gearing brings risks, however there still appears to be a great deal of gearing required to purchase the aircraft. The purchase of the aircraft puts high financial pressure upon Flybe, and is a huge additional risk, though the purchase of new aircraft is a must to keep up with competitors. It is dependant of Flybe's competitors as to how effective the purcgase of new aircraft will be; competitors may buy more quantity and quality of aircraft than Flybe therefore being in a better position towards consumers. Flybe aims to continue growth in the companies ancillary revenues. Flybe introduced a baggage charge to its customers, helping to raise an extra average �13.12 per customers in 2011. This fee was additional to the �70 fare that Flybe charge. ...read more.

It is stated that for the UK Flybe has a successful business model where it aims to differentiate itself from competitors. In Europe Flybe is less well known to consumers thus it will be hard for them to reduce costs, especially with competitors likely to be being much less accommodating if Flybe go for lucrative destinations in Europe. The vast amount of larger competitors in Europe, along with Flybe's growing success in the UK, leads me to be believe Flybe shouldn't expand into Europe in the short term and focus on the UK where their business model is successful. The continuation of adding further UK routes and increasing the ancillary revenues should help Flybe improve in the UK. In the longer term, when they may have more chance to compete in the 'major price war', Flybe should then look to expand into Europe as they will likely be in a better position overall. The year 2017, where they then have the option to purchase 105 more aircraft may be a viable time to expand into Europe. ...read more.