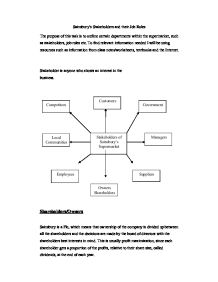 Sainsbury's Stakeholders and their Job Roles

Sainsbury's Stakeholders and their Job Roles The purpose of this task is to outline certain departments within the supermarket, such as stakeholders, job roles etc. To find relevant information needed I will be using resources such as information from class notes/worksheets, textbooks and the Internet. Stakeholder is anyone who shows an interest in the business. Shareholders/Owners Sainsbury is a Plc, which means that ownership of the company is divided up between all the shareholders and the decisions are made by the board of directors with the shareholders best interests in mind. This is usually profit maximization, since each shareholder gets a proportion of the profits, relative to their share size, called dividends, at the end of each year. The company, which generates its shareholders the most dividends, is likely to attract the most potential shareholders and keep most of its shareholders, which will generate capital for the company. Therefore, it is important to keep the shareholders satisfied since they generate capital for the company, this has to be done with regard for other stakeholders, for example if Sainsbury reduced prices shareholders would be displeased since, less profit would be made leading to lower dividend payment at the end of the year. But lowering prices improves the relationship with customers, which will lead to more customers, thus the spending on reducing costs would be recover and the company's market share would be increased. ...read more.

Customers influence Sainsbury by purchasing and using the products Sainsbury sell. If the customer finds that they are not happy with the products and services they can decide to stop using or discontinue using Sainsbury products and services, which will have an huge impact on the company as profits will fall. Suppliers Suppliers are the companies who supply the products which businesses sell consequently they are important stakeholders. Companies often find it difficult to satisfy suppliers, especially large supermarket chains, since they want to pay the lowest possible price for the products, so suppliers end up making little profit from their products. Due to these problems with satisfying suppliers large companies will often expand vertically, thus purchasing the suppliers, thus lowering costs which will benefit the other stakeholders since it will mean lower costs, therefore increasing the profit margin on the products, whilst making it possible to lower the selling price of products. Sainsbury, attempt to satisfy their suppliers by buying them, thus removing any dissatisfaction they may have as stakeholders. The suppliers that Sainsbury does not own do not generally have their concerns taken into account since if they will not sell their products at the price Sainsbury wants them to, Sainsbury will simply purchase the product from a supplier who is willing to supply at that price. Sainsbury can do this because all the potential companies for which the suppliers can supply do the same; since the supermarket market is a highly competitive one and companies attempt to match the price of rivals. ...read more.

Therefore, if the community is unhappy, as are other stakeholders, such as stakeholders, since less profit will be being made, so they will be receiving less in the form of dividends. Furthermore independent suppliers may be reluctant to supply the company, lest the company's bad reputation be bestowed upon them. To combat the detrimental effects a business may have on a local community, such as increased traffic and pollution, companies often set up schemes to benefit the local community. Sainsbury scheme to combat unrest in the local communities is that they offer 'free' computers for school, if customers spend a certain amount. This not only benefits the local community, it gives Sainsbury additional publicity, relatively cost free, since customers will be more willing to spend a little extra because if they do they are contributing towards a good cause, this bolters the companies profits, thus recuperating the costs of the scheme. This also satisfies other stakeholders, the shareholders will possibly gain more in the form of dividends due to the increase profits from the greater publicity and customer spending. The employees will be better motivated because they will feel that working harder will benefit a good cause, since they will be encouraging customers to purchase greater quantities of products. This scheme will also encourage suppliers to supply Sainsbury ahead of other supermarkets, since being the supplier of a company which helps the community would add to their image. Throughout this task I have discovered the delicate balance between all the stakeholders and how one dissatisfied stakeholder will cause the majority of the other stakeholders to become dissatisfied ...read more.

***** A very well written piece that gives a good overview of the interests of stakeholders and the conflicts between them.