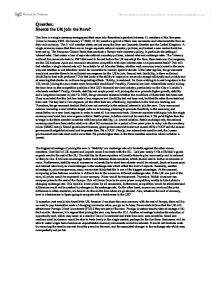 Should the UK join the Euro?

Question: Should the UK join the Euro? The Euro is a single currency arrangement that came into theoretical operation between 11 members of the European Union in January 1999. On January 1st 2002, 12 EU members got rid of their own currencies and introduced the Euro as their sole currency. The 3 'old' member states not yet using the Euro are Denmark, Sweden and the United Kingdom. A single currency means that there are no longer separate national monetary policies, and instead a new central bank has been set up, The European Central Bank, that conducts a Europe wide monetary policy, in particular the setting of interest rates. That means a loss of separate national monetary policies, interest rates and exchange rates. The Treasury outlined five economic tests in 1997 that need to be met before the UK can adopt the Euro, these tests are: Convergence, are the UK business cycle and economic structures compatible with euro interest rates on a permanent basis? This will test whether a single interest rate will be suitable for all Member States, whether each economy would react in the same way and whether or not Members would be vulnerable to country specific shocks. If the latter applies, the government would not consider there to be sufficient convergence for the UK to join. Second test: flexibility, is there sufficient flexibility to deal with problems? ...read more.

It will also encourage further trade between these countries, which should lead to further economies of scale. Furthermore, stability would increase as vulnerability to short term shocks would be reduced, (such as house price and interest rate rises), as would changes in the exchange rate which affect the level of exports. Secondly, another advantage is, price transparency, many economists think that this is one of the biggest advantages. At the moment, comparing prices between countries is difficult due to the numerous different exchange rates. If the UK was part of the euro, all prices would be expressed in one currency. Prices would be transparent. Therefore, British consumer can compare prices to the rest of the Europe. This will force firms to be more prices competitive, unable to hide behind a changing exchange rate. This result in lower prices for all consumers, furthermore, competition would be stimulated and differences could not be masked by changes in the exchange rate. On the other hand, anyone can work out the price difference in other countries; we have to do this all the time when we go abroad. Also, whatever the unit of currency, how is a hairdresser in Spain going to compete with a hairdresser in the UK? Transaction cost would also benefit the UK, because if we share the same currency with the rest of Europe, there will be no need to pay transaction costs of changing currencies when you go on holiday. ...read more.

The stability pact that the member countries have signed up to means that their annual budget deficits cannot exceed 3% of GDP. Furthermore, mortgages in the UK are different to those in the rest of Europe. In the UK, there are a high proportion of owner-occupiers with variable rate mortgages. In the rest of Europe, however, there is a higher tendency for long term renting, and those that do have mortgages are on long term fixed rates. Therefore, homeowners in the UK are more likely to be affected by interest rate changes than their counterparts in other EU states. Joining the euro may restrict the amount of long term borrowing the UK is able to carry out. Euro zone countries are subject to the stability and growth pact, which means that countries must not spend beyond their means. If the UK wishes to borrow money for long term investment, this would be against the guidelines. To conclude, the UK missed out on some benefits that come from membership of single currency. However these lost benefits appear to be relatively small and do not interfere with the general economic performance. Membership of the Euro could have caused serious problems in the UK. It would have struggled to deal with the interest rate setting. As the UK headed towards a recession, the UK needs the flexibility of monetary and fiscal policy. This is particularly important in the UK because of the sensitive nature of homeowners to interest rates. ?? ?? ?? ?? ...read more.