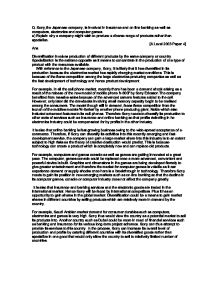 Sony,the Japanese company, is involved in insurance and on-line banking as well as computers, electronics and computer games. a) Explain why a company might wish to produce a diverse range of products rather than specialise.

Q. Sony,the Japanese company, is involved in insurance and on-line banking as well as computers, electronics and computer games. a) Explain why a company might wish to produce a diverse range of products rather than specialise. [A Level 2003 Paper 4] Ans. Diversification involves production of different products by the same company or country. Specialization is the extreme opposite as it means to concentrate in the production of one type of product with the resources available. With reference to the Japanese company, Sony, it is likely that it has diversified in its production because the electronics market has rapidly changing market conditions. This is because of the fierce competition among the large electronics-producing companies as well as the fast development of technology and hence product development. For example, in all the cell phone market, recently there has been a demand shock arising as a result of the release of the new model of mobile phone 'k-800i' by Sony Ericsson.The company benefited from massive sales because of the advanced camera features added to the cell. However, only later did the drawbacks involving small memory capacity begin to be realised among the consumers. ...read more.

Therefore diversification helps to reduce risks of decline in the company the result of which could be serious once unemployment, trade deficit and reduction in incomes occur. Diversification helps in promoting brand name, increase profits and market share. b) Sony is a large company that can influence the price of its products. Discuss whether imperfect market structures which allow such companies are beneficial. A. Sony is operating in an imperfect market structure as the company is a price-taker. Since the company also differentiates its products, promotes its products through advertising, has a large number of competitors; it is likely that Sony is operating under monopolistic competition. Fig. 1 The diagram figure 1 shows the costs and revenues of a firm under monopolistic market structure. Firms under this imperfect market structure produce output level where MC=MR i.e. marginal cost equals marginal revenue; but fixed price on the demand curve which is equivalent to the average revenue curve. As a result, the company is able to increase revenue if it had priced where MC=MR. Due to this consumer surplus i.e. the difference between what price consumers are read to pay and what they actually pay; reduces. ...read more.

This result into net social welfare and allocative efficiency because resources are allocated in ways society will benefit due to an improved environment. Imperfect markets therefore are beneficial to the producers from some perspectives and is also beneficial to the consumer from some perspectives. It is beneficial to producers because they are able to earn abnormal profits by being able to set prices and gain market shares by non-price competition. However, producers who want to set up their own firm may lose out because the find it impossible to cross the natural barriers or even artificial barriers to entry to be able to gain a share in the abnormal profits being made in the industry. Consumers gain because of greater varieties of products brought about by research and development by firms. Consumers too get better information about products and be able to enjoy sovereignty and variety. They can be suffering though due to high prices of products that may not fully reflect the value they place on the product. Firms may also practice anti-competitive practices such as force potential entrants out of the market of the market or collude with other firms to exploit market and earn high profits at the consumer's expense. Whether imperfect markets are beneficial or not depends on the firms' activities and consumer sovereignty and the economic efficiency attained. ...read more.