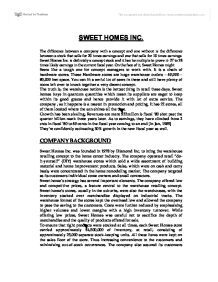 SWEET HOMES INC. The difference between a company with a concept and one without is the difference between a stock that sells for 20 times earnings and one that sells for 10 times earnings. Sweet Homes Inc. is definitely a concept stock and it has he multiple to prove it- 27 to 28 times likely earnings in the current fiscal year. On the face of it, Sweet Homes might Seem like a tough one for concept managers to work with. It is a chain of hardware stores. These Hardware stores are huge warehouse outlets - 60,000 - 80,000 feet space. You can fit a awful lot of saws in these and still have plenty of room left over to knock together a very decent concept. The truth is, the warehouse notion is the hottest thing in retail these days. Sweet homes buys in quantum quantities which mean its suppliers are eager to keep within its good graces and hence provide it with lot of extra service. The company , as it happens is a master in promotion and pricing. It has 22 stores, all of them located where the sun shines all the time. Growth has been sizzling, Revenues are mere $22millon is fiscal '80 shot past the quarter billion mark three years later. As to earnings, they have climbed from 2 cnts in fiscal '80 to 60 cents in the fiscal year coming to an end [in Jan, 1985] They're confidently estimating 30% growth in the new fiscal year as well. ...read more.

The company pursued a number of policies to address this need. Approximated 90% of the company's employees were on a full-time basis. To attract and retain a strong sales force, the company maintained salary and wage levels above those of its competitors. All the sales personnel attended special training sessions to gain through knowledge of the company's home improvement products and their basic applications. This training enabled hem to answer shoppers' questions and help customers in choosing equipments and materials appropriate for their projects. Often the expert advice the sales personnel provided created a bond that resulted in continuous contact with the customer throughout duration of the customer's project. Finally, to attract customers Sweet Homes Inc. pursued an aggressive advertising program utilizing newspapers, television, radio and direct mail catalogues. The company's advertising stressed promotional pricing, the broad assortment and depth of its merchandise and he assistance provided by its sales personnel. The company also sponsored in-store demonstrations of do-it-yourself techniques and product uses. To increase customer's shopping convenience the stores were open seven days a week, including weekday evenings. Fortune Magazine commented on Sweet Home Inc's strategies as follows - "Warehouse stores typically offer shoppers deep discounts with minimal service back-to-basics ambience. Sweet Home Inc had all the charm of a freight yard and predictably low prices. But they also offer unusually helpful customer service. ...read more.

During 1985, the company implemented its most ambitions expansion plan to date by adding 2 new store chains which was in financial difficulty. As Sweet Homes engaged in major expansion, its revenue rose 62% from $432 million to in 1984 to $700 million in 1985. However, the company's earnings declined in 1985 from the record levels achieved during the previous year. In 1985, it earned $8.2million, or $0.33 per share, as compared with $14.1 million or $0.56 per share in 1984. As fiscal year 1985 came to a close, Sweet Homes faced some critical issues. The competition in the DIY industry heated up. The fight for market dominance was expected to result in pressure on margins and industry analysts expected only the strongest and most capable firms in the industry to survive. Also Sweet Homes has announced plans for further expansion that included the opening of nine new stores in 1986. The company estimated that site acquisition and construction would cost about $6.6million for each new store and investment in inventory would require additional $1.8million per store. The company needed significant additional financing to implement these plans. Sweet Homes relied on external financing - both debt and equity - to fund its growth in 1984 and 85. However the significant drop in its stock price in '85 made further equity financing less attractive. While the company could borrow from its line of credit, it had to make sure that it could satisfy the interest coverage requirements. ...read more.