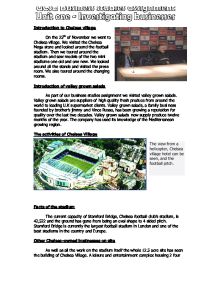 The activities of Chelsea Village I have discussed the stadium and the other businesses but what are their activities? Chelsea F.C and businesses obviously aims to create a profit and to gain customer satisfaction

Introduction to Chelsea village On the 25th of November we went to Chelsea village. We visited the Chelsea Mega store and looked around the football stadium. Then we toured around the stadium and saw models of the two mini stadiums one old and one new. We looked around all the stands and visited the press room. We also toured around the changing rooms. Introduction of valley grown salads As part of our business studies assignment we visited valley grown salads. Valley grown salads are suppliers of high quality fresh produce from around the world to leading U.K supermarket clients. Valley grown salads, a family business founded by brother's jimmy and Vince Russo, has been growing a reputation for quality over the last two decades. Valley grown salads now supply produce twelve months of the year. The company has used its knowledge of the Mediterranean growing region. The activities of Chelsea Village The view from a helicopter, Chelsea village hotel can be seen, and the football pitch. Facts of the stadium The current capacity of Stamford Bridge, Chelsea football club's stadium, is 42,522 and the ground has gone from being an oval shape to 4 sided pitch. Stamford Bridge is currently the largest football stadium in London and one of the best stadiums in the country and Europe. Other Chelsea-owned businesses on site As well as all the work on the stadium itself the whole 12.5 acre site has seen the building of Chelsea Village. A leisure and entertainment complex housing 2 four star hotels, 5 restaurants, conference and banqueting facilities, nightclub, underground car park, health club and business centre. It has come a long way since the original football stadium was built in 1876. The activities of Chelsea Village I have discussed the stadium and the other businesses but what are their activities? Chelsea F.C and businesses obviously aims to create a profit and to gain customer satisfaction or 'goodwill' businesses like the burger bars aim to provide high-quality fast foods for the fans and to create a profit. ...read more.

Other businesses like the Chelsea Mega store may train their employees because of new machinery for example, a fork lifts truck; communication would be used via a manual or a demonstration. Communication in the form of person to person is needed for training on VGS machinery for example, packing machines. However there also may be a manual available for the piece of machinery. The football player's trade union would communicate through formal letters. If needed, they may arrange an interview with the footballer to communicate face to face. This is the same for VGS. Sales and marketing, market research and pricing The market researchers at Chelsea [the scouts] would communicate by writing a detailed statement or report of what they have assessed, they may at first communicate informally by telephone or email. The market researchers at valley grown salads may communicate their findings by writing a detailed report with prices etc. Chelsea's pricing strategies are determined by the market researcher's findings; therefore the researcher would communicate by writing a report of his/her findings. This would also be the same for valley grown salads. Research and Development, Product improvements This functional area may need to communicate with shirt designers via sketches and reports; this is the same for the Chelsea game etc. This functional area may also need to communicate with companies that offer efficient fertilisers. They will need to communicate in the form of writing and if VGS are interested they may call for a meeting. Finance and accounts - Monitoring income and expenditure This functional area communicates discreetly, for example Jose may communicate to the board of directors only by face to face meetings and conferences. It is an important part of the business, so a memo will not be good enough. Because VGS have chosen to conceal their account information they will need to communicate formally, in the form of face to face or a written report. ...read more.