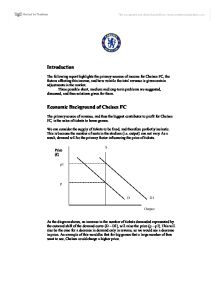 The following report highlights the primary sources of income for Chelsea FC, the factors affecting this income, and how volatile the total revenue is given certain adjustments in the market.

Introduction The following report highlights the primary sources of income for Chelsea FC, the factors affecting this income, and how volatile the total revenue is given certain adjustments in the market. Three possible short, medium and long-term problems are suggested, discussed, and then solutions given for them. Economic Background of Chelsea FC The primary source of revenue, and thus the biggest contributor to profit for Chelsea FC, is the sales of tickets to home games. We can consider the supply of tickets to be fixed, and therefore perfectly inelastic. This is because the number of seats in the stadium (i.e. output) can not vary. As a result, demand will be the primary factor influencing the price of tickets. As the diagram shows, an increase in the number of tickets demanded represented by the outward shift of the demand curve (D - D1), will raise the price (p - p1). This will also be the case for a decrease in demand only in reverse, so we would see a decrease in price. An example of this would be that for big games that a large number of fans want to see, Chelsea could charge a higher price. The elasticity of demand for tickets will be neither particularly elastic nor inelastic, as demand will be strong amongst Chelsea fans (making it inelastic), but at the same time it is a luxury good rather than a necessity (making it elastic). ...read more.

Long Queue's (medium-run) On match day, queue's to get into the ground via the ticket entrances, as well as queues at all the bars and caf�s are notorious. Such queue's again have a negative affect on the experience of customers going to see the match. As a result, demand will again decrease, due to those customers no longer willing to wait to get into the ground not wanting to go and not demanding tickets. This means that effectively the prices Chelsea are able to charge will not be as great. As well as this, demand for drinks and food at the bars and caf�s will decrease due the queue's. This will all result in an overall decrease in total revenue for Chelsea FC. Small Stadium Capacity (long-run) The Chelsea FC stadium currently holds 42,500. Given that Chelsea are one of the most successful teams in the Premiership (in terms of league places), as well as one of the most popular for fans, this could be a big problem in the long-run. Although as shown before with a fixed number of tickets an increase in demand will lead to an increase in price and therefore revenue for Chelsea, in reality there is cap that has to placed on ticket prices to prevent a revolt by the fans. An example of this can be seen a few years ago when Manchester United fans revolted and formed their own club in protest of the high ticket prices. ...read more.

One is to increase the capacity of the existing stadium by building extra seats on to it, another is to build a completely new stadium all together. Both of these options will effectively increase the supply of tickets to matches, and given the cap on ticket prices as already explained will increase total revenue. It is worth noting here that even if ticket prices were not capped, given the perfectly inelastic supply, it may still be more profitable to increase supply in this way. It would all depend on the shape of the demand curve, i.e. how elastic it is. But by increasing capacity in either case, Chelsea FC will reap increased revenue from sales. Conclusion The three economic problems illustrated above all hinder the demand for the "product" i.e. the match, Chelsea Football Club is supplying. If Chelsea FC were to employ the strategies as suggested above, they would improve the experience on offer to customers thus increasing the demand for tickets, as well as increase the number of tickets they are able to supply. This will all lead to a big increase in total revenue, which in turn will reap greater profits for the club. Please Note: One critical assumption has been made throughout this report about the "product" that Chelsea FC is supplying. That is that the football team is performing at a consistent level. Increases or decreases in performance of the football team will increase or decrease the levels of demand in both ticket sales and merchandise respectively. ...read more.