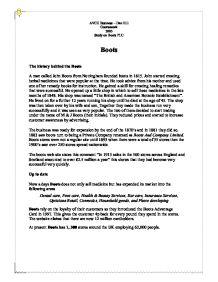 The history behind the Boots.

Boots The history behind the Boots A man called John Boots from Nottingham founded boots in 1815. John started creating herbal medicines that were popular at the time. He took advice from his mother and used one of her remedy books for instruction. He gained a skill for creating healing remedies that were successful. He opened up a little shop in which to sell these medicines in the late months of 1848. His shop was named "The British and American Botanic Establishment". He lived on for a further 12 years running his shop until he died at the age of 45. The shop was then taken over by his wife and son. Together they made the business run very successfully and it was seen as very popular. The two of them decided to start trading under the name of M & J Boots (their initials). They reduced prices and started to increase customer awareness by advertising. The business was ready for expansion by the end of the 1870's and in 1881 they did so. 1883 saw boots turn to being a Private Company renamed as Boots And Company Limited. Boots stores were not a regular site until 1893 when there were a total of 35 stores then the 1900's saw over 250 stores spread nationwide. The boots web site states this comment "In 1913 sales in the 560 stores across England and Scotland amounted to over �2.5 million a year" this shows that they had become very successful very quickly. Up to date Now a days Boots does not only sell medicine but has expanded its market into the following areas Dental care, Foot care, Health & Beauty Services, Ear care, Insurance Services, Opticians Retail, Cosmetics, Household goods, and Photo developing Boots rely on the loyalty of their customers so they introduced the Boots Advantage Card in 1997. This gives the customer 4p back for every pound they spend in the stores. ...read more.

It appears that it is a democratic business and the management style is how I explained above. There are issues of autocratic management, an example of this is that there is a lack of communication between the management and staff but this does not however mean they don't work together. This may just be in the branch that Sonia works in so it is not fair to say that all branches work in this way. The bonus and appraisal system will motivate staff, which increases efficiency of customer service, which is an objective of the business. The fact that the staff works well acts towards the successful running of the business. This will ultimately result in the making of profit, which is another objective. Boots has a good culture and management style. This is reflected in the profits and success the business has achieved. As the democratic style and good culture have worked effectively this has helped boots to work towards and effectively achieve some of their set objectives. Organizational structure of the business Businesses can take different approaches on the way they structure the organization of their business. The different types of structures include flat, matrix, and tall. These represent hierarchical, centralized and decentralized forms of organization. These different structures are used in different types of organization relating to the needs the business may require. In a tall structure there are many levels. People of different status within the business take each level. This is hierarchical. As the levels get higher in the structure, the power and responsibility usually increases. In a tall structured organization there would the top layer of the structure but many at the bottom represent few people. This structure would be used in a large business where there would be many members of staff, many groups under different supervision. This form of organization would cause there to be a lack of communication throughout the business as issues would be passed through the levels, supervisors to managers and may never reach the managing director. ...read more.

Links are used a lot to make it quick and appealing for customers to explore the online shop and be tempted to purchase goods. This increases the performance of the business by again making more money from as little input as possible. It saves Boots money, time, and manpower, which effectively frees more opportunity for the business to expand and develop. Without ICT Boots would by now have lost out to competition, wasted hundreds of thousands of pounds ineffectively and not bee the multi million pound empire they are today. Production process The production process is typically present within the operation of a manufacturing orientated business. This is the basic process of production INPUT --> PROCESS --> OUTPUT Boots is retail service not a manufacturing one. The production process is still however related around the business. Although Boots do not manufacture products the production process is vital in ensuring all elements of the business operation run smoothly. The production process as shown above consists of three sections which are the input the process and the output. Boots is in the tertiary section of the industry as it is an outlet that sells goods. This is the output and this is the main aspect that affects Boots. The inputs are the primary sector and the process is secondary. As Boots is in the tertiary sector and sells goods it must also use the secondary and primary industry also. An example of the process would be involving the secondary section of industry. This would be the purchasing of goods from suppliers to sell in the store. Boots do not directly have a contribution to this area of the production process. They do however contribute to the input section of the production process which represents the primary industry. Boots can investigate medicines and test treatments for sales in their stores. The manufacturing, mass production and distribution to stores are the process part of Boots production process representing secondary industry. AVCE Business - Dan Hill Coursework 2003 Study on Boots PLC ...read more.