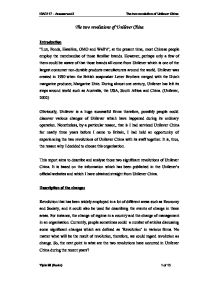 The two revolutions of Unilever China.

The two revolutions of Unilever China Introduction "Lux, Ponds, Hazeline, OMO and Wall's", at the present time, most Chinese people employ the merchandise of those familiar brands. However, perhaps only a few of them could be aware of that those brands all come from Unilever which is one of the largest consumer non-durable products manufacturers around the world. Unilever was created in 1930 when the British soapmaker Lever Brothers merged with the Dutch margarine producer, Margarine Unie. During almost one century, Unilever has left its steps around world such as Australia, the USA, South Africa and China. (Unilever, 2002) Obviously, Unilever is a huge successful firms therefore, possibly people could discover various changes of Unilever which have happened during its ordinary operation. Nonetheless, by a particular reason, that is I had serviced Unilever China for nearly three years before I came to Britain, I had held an opportunity of experiencing the two revolutions of Unilever China with its staff together. It is, thus, the reason why I decided to choose this organisation. This report aims to describe and analyse those two significant revolutions of Unilever China. It is based on the information which has been published in the Unilever's official websites and which I have obtained straight from Unilever China. Description of the changes Revolution that has been widely employed in a lot of different areas such as Economy and Society, and it could also be used for describing the events of change in these areas. For instance, the change of regime in a country and the change of management in an organisation. Currently, people sometimes could a number of articles discussing some significant changes which are defined as 'Revolution' in various firms. No matter what will be the result of revolution, therefore, we could regard revolution as change. So, the next point is what are the two revolutions have occurred in Unilever China during the recent years? ...read more.

The annual sales figure appear that, in personal care sector, its products have been kept in a slightly increase or decrease lever and tend to grow to a stable maximum level. However, because of in the huge market, the amount of sales normally is significant. This situation, therefore, could be effective for Unilever China run and maintain its business owing to the enormous cashflow. It also contributed to launching Unilever's sixth Research and Development (R & D) Laboratory in China, 2000 in order to meet the everyday needs of the Chinese consumer and develop more products for the Chinese market. Facing the pressure form not only another large firm 'P & G' but also a lot of local booming manufactures, Unilever China has adopted a lot of effective measures in order to compete with them. For instance, frequent products promotion with the purpose of offering more profits to the customers and keeping the lower price. In addition, in order to maintain the awareness of brands, Unilever launches a lot of brilliant advertisements by using many famous pop stars in every season. Commentary on the three underlying systems: Technical, People, Economic (including: Organisational use of Information and Communication Technologies (ICT) A. Technical When I was working in ChinadotCom corporation Shanghai branch, I had had a lot of opportunities of communicating with IT staff of Unilever China. According to the information which I have gained form them, it is clear that if there was no supporting from Information and Communication Technologies (ICT), possibly, all of its business and management would be out of control. ICT plays a significant role of management in lots of successful western firms as well as in Unilever. Thus, when Unilever re-entered China in 1990, it also brought some advanced management systems especially Enterprise resource planning (ERP) software which it had already operated in most of its subsidiaries into Unilever China. Throughout six years' development, based on original ERP system, Unilever China has been building a brand-new Management Information System (MIS) ...read more.

On one side, they hope that they could learn more about advanced management theory by working with Unilever. On the other side, because of underlying the bureaucracy situation, they seem to be more likely as passive executors. They attempt to supply some advice about modifying the current circumstances in order to make the business more efficient. However, they always worry about the result could be not as well as their expecting. Moreover, in their minds, traditionally they believe that if you have done more, there would be more mistakes; if you have done nothing, there would be no mistake. Findings/Conclusions According to this report, although there have been a few problems which occurred before the two revolutions of Unilever China and maybe could happen in the future, obviously the changes of Unilever China have partly achieved the purpose of Unilever China. However, yet, there are some problem which Unilever China should deal with. For example, how to keep the pleasant relationship with local governments and business partners? These changes cause many people losing their jobs, although it is due to many sensible reasons such as low growth rate of globe economy and using high technologies. It has led to a lot of complaints from both inside the company and society. For Unilever China itself, it has obtained the current success, but in the long term plan there would be more changes which could happen in the future. However, having a long time successful experience, efficient business management style, using ICT to support its business effectively and more, those could be the important advantages for Unilever China. In conclusion, in my opinion, these two revolutions could be the useful sample about how the successful company changes its situation in order to fit different local markets. We also could acquire more details of performing the changes in an organisation. In addition, by analysing these changes, perhaps we could understand the reason why Unilever has succeeded in its area for a long time. Simply, it is 'change'. ...read more.