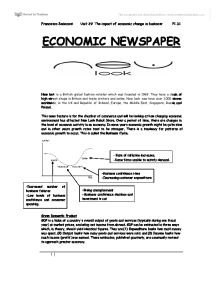 This news feature is for the chamber of commerce and will be looking at how changing economic environment has affected New Look Retail Store.

ECONOMIC NEWSPAPER New look is a British global fashion retailer which was founded in 1969. They have a chain of high street shops in Britain and trade in-store and online. New look now have over 1,000 stores worldwide, in the UK and Republic of Ireland, Europe, the Middle East, Singapore, Russia and Poland. This news feature is for the chamber of commerce and will be looking at how changing economic environment has affected New Look Retail Store. Over a period of time, there are changes in the level of economic activity in an economy. In some years economic growth might be quite slow and in other years growth rates tend to be stronger. There is a tendency for patterns of economic growth to occur. This is called the Business Cycle. Gross Domestic Product GDP is a Value of a country's overall output of goods and services (typically during one fiscal year) at market prices, excluding net income from abroad. GDP can be estimated in three ways which, in theory, should yield identical figures. They are (1) Expenditure basis: how much money was spent, (2) Output basis: how many goods and services were sold, and (3) Income basis: how much income (profit) was earned. These estimates, published quarterly, are constantly revised to approach greater accuracy. The United Kingdom is among the world's most developed economies. Services, particularly banking, insurance, and business services, account by far for the largest proportion of GDP while industry continues to decline in importance. Over the past two decades the government has greatly reduced public ownership and contained the growth of social welfare programs. The graph above shows UK Gross Domestic Product decreased by 0.5 per cent in the fourth quarter of 2010, compared with an increase of 0.7 per cent in the previous quarter. The GDP estimate was significantly affected by the bad weather in December; as customers and Suppliers could not get around supplying goods and services the GDP dropped. ...read more.

The balance of payments is basically an account showing the difference between the total exports and the total imports for a country. Exports are goods we sell abroad; Imports are those we buy from abroad. The last updated figure was in November 2010 and was �4.6 billion. The UK's deficit on trade in goods widened by �14.8 billion to �97.2 billion in 2010 and in 2009 it was only �82.4 billion. Total exports rose by 16.9 per cent, and total imports rose by 17.2 per cent. The United Kingdom's exports manufactured items like telecommunications equipment, automobiles, automatic data processing equipment, medicinal and pharmaceutical products and aircraft. Its main trading partners are European Union countries, The United States, China and Japan. . The statistics and graph could have had an effect on New Look in the sense that New Look was also able to trade more in their international stores as well concluding in more sales being made. This is also an indication that a recovery was being made. How Economic Environment Affect New Look New Look is a British global fashion retailer with a chain of high street shops in Britain, Belgium, France, The Netherlands, Republic of Ireland, Malta, Singapore and the United Arab Emirates. New Look was founded in 1969 in Weymouth, Dorset by Tom Singh. Since then the company has rapidly expanded and now operates across a chain of over 1,000 stores internationally and a staff of over 30,000. The group had a turn over of �1,147 billion in 2008 with profits of �179 million. I have carried out a PEST analysis to investigate the important factors that are changing within the business due to the economic environment. A PEST analysis will be easier to look at for me. P- Political Changes: I will be analysing the change in UK government or a change in government policy and how it might have affected New Look. ...read more.

Another way tax could affect New Look is that any new laws that the government could imply could affect the way a company is taxed, adding uncertainty in dealings. If New Look were to be un sure about it they could end up with a massive tax debt. S- Social changes & T- Technological changes: I will be analysing how New Look Relate to changes in wider society such as changes in lifestyles and how they relate to the application of new inventions and ideas such as the development of the internet and websites as business tools. A major social change has been that many people are working from home today using home computers to buy online and shop without having to go in store. This has led to a reduction in demand for less staff operating in store which means fewer jobs. Even though New Look will still receive profit, unemployment statistics will rise and an increase in benefits will be given out for example; job seekers allowance. If society continues this way, New Look may not even be making money in store anymore which will lead to them closing down and just operating online. New inventions like the Iphone and Ipad have applications were Retail stores can upload latest fashion and you can shop and browse right off your phone. This is a benefit to customers as it is easier for them to access rather than going in-store. Again, this type of intervention can result to job losses to the people who are actually working in-store. Employees will have no reason to come in to work as there would be no one to do customer service for. As for the economic environment now New Look are dealing with it affectively, however if society continues to change New Look will come out of business. ?? ?? ?? ?? Francesca Bademosi Unit 39: The impact of economic change in business P1 D1 1 ...read more.