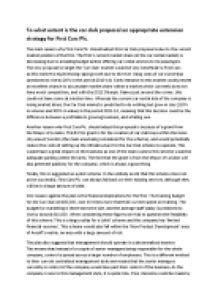 To what extent is the car club proposal an appropriate extension strategy for First Cars Plc.

﻿To what extent is the car club proposal an appropriate extension strategy for First Cars Plc. The main reason why First Cars Plc. should adopt this Car Club proposal is due to the current market position of the firm. The firm?s current market share (in the car rental market) is decreasing due to a leading budget airline offering car rental services to its passengers. The new proposal to target the ?Car Club? market would be very beneficial to First Cars as this market is experiencing rapid growth due to the ever rising costs of car ownership (predicted to rise by 20% in the period 2010-14). Early entrance to this market could present an excellent chance to accumulate market share within a market which currently does not have much competition, and with the 2012 Olympic Games just around the corner, this could not have come at a better time. ...read more.

The fact that the grant is from the Mayor of London will also generate publicity for the company, which is always a good thing. Finally, this is suggested as a pilot scheme. In the unlikely event that this scheme does not prove successful, First Cars Plc. can always fall back on their existing services, although they will be in a large amount of debt. One reason against the plan is the financial implications for the firm. The training budget for the Car Club is £400,000, over 10 times more that their current spend on training. The budget for marketing is three times the size, and the average staff salary is predicted to rise by around £10,000. When considering these figures one has to question the feasibility of this scheme. This is a large outlay for a ‘pilot’ scheme and the company has ‘limited financial reserves’. ...read more.

Has she doctored the figures in order to progress the scheme forward and impress her superiors? This could mean that the business is moving into a new market based on data which is not even correct. Overall I do not think that First Cars Plc. should adopt the Car Club Proposal. The idea looked initially promising; an emerging market which is predicted to grow by 300% in value, with little competition at present. These suggestions are all around figures that Amy has put together however. Without the knowledge that Amy may be biased with her predictions, this would appear to be a very good proposal. However, the depth and accuracy of the plan is vital to ensure the success of the business and as this has been brought into question, I would have to say that I do not recommend that First Cars Plc. should progress any further with this proposal until at least this data has been checked and agreed by the directors. ...read more.