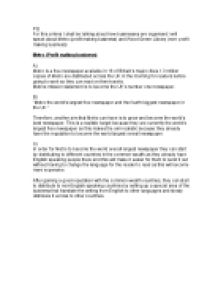 ﻿P3) For this criteria I shall be talking about how businesses are organised I will speak about Metro (profit making business) and Wood Green Library (non- profit making business) Metro (Profit making business) A) Metro is a free newspaper available in 16 of Britain's major cities.1.3 million copies of Metro are distributed across the UK in the morning for readers before going to work so they can read on their travels. Metros mission statement is to become the UK?s number one newspaper. B) ?Metro the world's largest free newspaper and the fourth biggest newspaper in the UK.? Therefore, another aim that Metro can have is to grow and become the world?s best newspaper. This is a realistic target because they are currently the world?s largest free newspaper so this makes the aim realistic because they already have the reputation to become the world largest overall newspaper. C) In order for Metro to become the world overall largest newspaper they can start by distributing to different countries in the common wealth as they already have English speaking people there and this will make it easier for them to send it out without having to change the language for the reader to read as this will become more expensive. After gaining a good reputation with the common wealth countries, they can start to distribute to non-English speaking countries by setting up a special area of the business that translate the writing from English to other languages and slowly distribute it across to other countries. ...read more.

Recession The recession hit Chrysler hard as they had a $207 million second-quarter loss. The recession was said to have started in December 2007 in the United Sates. Chrysler was affected by the recession and many workers lost their job. One of the workers said ?people are scared? the workers did not have job security and could lose their job at any minute. Almost 700 workers lost their job. Chrysler reduced its net loss in the third quarter to a net loss of $84 million. Chrysler?s profits have risen again after predicting a negative cash flow. Chrysler found that consumer?s demands are slow to recover. Chrysler could not pay off their debts no more and joined General motors. Both General Motors and Chrysler became bankrupt and had to sell the business. Chrysler has the longest road to recover from last year?s bankruptcy for Chrysler and General Motors. Competition Chrysler has many competitors their main competitors are Ford, Vauxhall, BMW, Mercedes, Volkswagen, Nissan, Mazda, and Toyota. These businesses are continuously improving their cars. Chrysler?s sales would be much higher if they had no competition. Their main competition is VW as they are cheaper and their cars are advertised more also their cars are more eco-friendly as it uses less petrol with a bigger sized engine even though it has all the factors of a smaller engine. Both Sainsbury?s and Chrysler were affected by the recession even though it was in different countries. Chrysler is in the United Stated and Sainsbury?s in the U.K. ...read more.

This means that they might not have enough workers to do the jobs that need to be done on a day-to-day basis. The job would also take longer to get done as there are less people working on one thing at a time. Their sales would also decrease as they would not have as many people buying their cars as the population has decreased. Changes in structure The population of older people in America is increasing really fast. ?The United States has seen a rapid growth in its elderly population during the 20th century. The number of Americans aged 65 and older climbed to 35 million in 2000, compared with 3.1 million in 1900.? People now tend to work when they are younger and spend their savings when they are older. They also have a different spending pattern to younger people for example instead of buying the latest car they may decide to buy stair lifts and anti-aging cream. Political factors influencing Chrysler Providing infrastructure The government provides the central infrastructure of the economy. They build motorways and other major road links. The local government is responsible for all the local roads. If there is a problem on the roads Chrysler would struggle to bring in their cars to the factory, their suppliers would also struggle to take them the raw material that they would need. Chrysler needs the roads to be open and working to make sure that they can take customers their cars and so they can receive their raw materials from suppliers. ...read more.