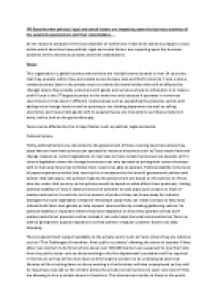 Unit 1 P6 Describe how political, legal and social factors are impacting upon the business activities of Tescos and their stakeholders.

When the E.U was set up after the ww2 it was set up to easily transport resources such as coal between 2 or more countries where resources had been used up or have been destroyed in the original country so the countries who agreed to the treaty worked together to support each other. So far the E.U has allowed 3.5 million jobs that are linked between two or more countries for instance factories are set up in France to help run stores within the U.K, so the U.K being within E.U is relevant to Tesco because it allows easy access between countries to transport goods and set up resources and establishing a relationship with cheaper suppliers from other countries, so it is relevant to Tesco by allowing them to transport goods without being stopped or delayed between boarders. Legal factors- Company law is where they have a legislation which the formation governance of a firm is administered and controlled. Within the U.K the term company is used for business that fall under company?s act of 2006. It is the field of law which concerns companies such businesses, organization, partnerships and other business type?s that have an economic activity like charities. ...read more.

Demographic indicators have changed in the U.K over the years, the most common change is the change in religion where those with no religion have increased, percentage of those Christian decreased, those Muslims have increased also those which other religion have also increased so to conclude there is more of multicultural society where the native religion is decreased. These changes do affect Tesco as an organisation where if they want to keep a large customer base or increase their customer base they need to show products that are relevant to those migrating in the country such as if there is a large population is eastern Europe they could advertise their traditional foods within the store to attract them so it they can successfully pull of a campaign they can attract new customers to the store. So at first it would be a challenge where they need to do market research and everything to see what nationality of people are moving in what products they are interested in such as the foods they prefer like fruit and vegetables, canned food and also what new foods they can offer. But then it does allow them to gain an opportunity if they do successfully attract a new customer base so profit would increase also would the reputation of the store would increase as well. ...read more.