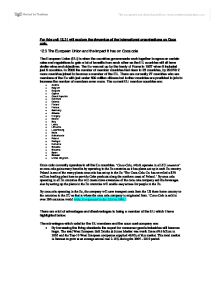 For this unit 12.3 I will explore the dynamics of the international organisations on Coca cola. 12.3 The European Union and the impact it has on Coca cola The European Union (EU) is when the countries governments work together to agree on certain rules and regulations to gain a lot of benefits from each other as the EU countries will all have similar aims and objectives. The Eu was set up by the treaty of Rome in 1957 when it included just 6 countries. In 2006 the number of member countries had risen to 25 countries, by 2007/8 2 more countries joined to become a member of the EU. There are currently 27 countries who are members of the Eu with just under 500 million citizens but further countries are predicted to join to increase the number of members even more. The current EU member countries are: * Austria * Belgium * Bulgaria * Cyprus * Czech Republic * Denmark * Estonia * Finland * France * Germany * Greece * Hungary * Ireland * Italy * Latvia * Lithuania * Luxembourg * Malta * Netherlands * Poland * Portugal * Romania * Slovakia * Slovenia * Spain * Sweden * United Kingdom. Coca cola currently operates in all the Eu countries. 'Coca-Cola, which operates in all EU countries' so coca cola gains many benefits by operating in the Eu countries as it has plants set up in each Eu country. Poland is one of the many plants coca cola has set up in the Eu 'The Coca-Cola Co. has unveiled a $30 million bottling plant here to provide Coke products along the northern coast of Poland.' By coca cola operating in all Eu countries this will create more awareness of the coca cola company and the beverages also by setting up the plants in the Eu countries will enable easy access for people in the Eu. ...read more.

better reputation than the coca cola plants that operate in non- Eu countries, as they will have better living standards, reducing costs, benefit from single currency, greater opportunities for coca cola employees within the Eu countries, gaining productivity efficiency, coca cola employees protected by citizen of human rights whilst travelling in other Eu countries and finally less chance of war between member states. EU laws European laws are known as directives. The EU has certain directives which will affect Coca cola these are National minimum wage 1999 National minimum wage 1999 law was set to provide a legal right which covers the entire EU. It was set to prevent very low pay also this will be fair towards all employees by making each employee getting paid appropriately for how much hours they work. This affects coca cola as the number of hours for which Coca cola employees work, coca cola has to pay there workers at least the minimum wage which is calculated, according to the types of work the Coca cola employees do. Coca cola will base the wages on 4 things which are: * Time * Salaried hours * Output * Unmeasured work. There is no evidence that coca cola has broken this law within the Eu but it has broken the law in Chile outside the EU 'In Chile, Coca-Cola workers have been striking because the company is forcing them to work 16 hours a day for less than minimum wage.' This will give coca cola a very bad corporate image as it shows it coca cola does not treat there staff in the right manner by forcing them to work 16 hours a day, this shows coca cola are overworking there staff and do not care about them also by paying minimum wage this shows that coca cola do not value there staff. Also by coca cola making there staff work excessively may affect there work which may lead to poor quality coca cola beverages being produced. ...read more.

Commission Directive 2002/67/EC of 18 July 2002 on the labelling of foodstuffs containing quinine, and of foodstuffs containing caffeine [Official Journal L 191 of 19.07.2002]. ACT-Council Directive 2001/112/EC of 20 September 2001 relating to fruit juices and certain similar products intended for human consumption ACT-Council Directive 80/777/EEC of 15 July 1980 on the approximation of the laws of the Member States relating to the exploitation and marketing of natural mineral waters [ See amending acts ]. ACT-Commission Directive 2002/72/EC of 6 August 2002 relating to plastic materials and articles intended to come into contact with foodstuffs ACT-Council Directive 90/435/EEC of 23 July 1990 on the common system of taxation applicable in the case of parent companies and subsidiaries of different Member States Council Regulation (EEC) No 881/92 of 26 March 1992 on access to the market in the carriage of goods by road within the Community to or from the territory of a Member State or passing across the territory of one or more Member States ACT-Communication from the Commission to the European Parliament and Council of 21 June 2000 - Towards a safer and more competitive high-quality road transport system in the Community [COM (2000) 364 final ACT-Council Regulation (EC) No 1/2003 of 16 December 2002 on the implementation of the rules on competition laid down in Articles 81 and 82 of the Treaty Commission notice on the definition of relevant market for the purposes of Community competition law [ Official Journal C 372 of 09.12.1997 ]. EU Trade Policies EU Common Agricultural Policy (CAP) EU Taxes Rules and regulations Trade, Subsidies for farmers Waste product from a Coca-Cola plant in India which the company provides as fertiliser for local farmers contains toxic chemicals, a BBC study has found. Coca cola have caused problems for the agricultural policy 'Coca Cola factories have also even been selling their toxic waste to local farmers labelled as "fertilizer", poisoning food supplies and causing long-term contamination of farm land.' There are many factors of the Eu taxation regulation that can affect coca cola which are discussed below. Taxes are also known as tariffs. ...read more.