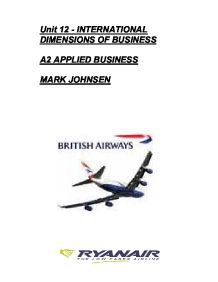 Unit 12 - INTERNATIONAL DIMENSIONS OF BUSINESS A2 APPLIED BUSINESS MARK JOHNSEN Introduction My name is Mark Johnsen and I am a 17 year old student currently studying my A2 Applied Business course at St. Francais Xavier 6th form. Me and my classmates have recently began a new assignment called 'international dimensions of business' and during the 4 different tasks of this unit, I will be completing a full investigation of at least two businesses with an international presence (one European & one Global) with a comprehensive comparison of the similarities and differences between them, I will be researching and analysing the reasons behind why one of my chosen businesses decided to develop an international presence, I will fully explore the way the behaviour and actions of one of my chosen businesses is influenced by the impact of international businesses as a whole, I will complete a full evaluation of the influence and growth of an MNC and last but not least, throughout this unit, I will also be studying a variety of international organisations and their role in helping to promote trade and growth in a global activity. Basic reasons why businesses (British Airways and RyanAir create an International Presence Before I begin to compare and go into depth about the two businesses that I have chosen, I will firstly begin with some of the basic reasons as to why British Airways and RyanAir may have decided to try to expand onto the international scene and explore some of the benefits that working on a European and global offers to both of them. When a person(s) decides to enter a product or service into the market, more often than not it will come into his/her mind to potentially expand onto a global scale and this is because it offers so many more luxuries and possibilities than working in just one nation. I will now use the early part of the task to give examples and explain some of the temptations that push business owners into the international market just as it did with British Airways and RyanAir. ...read more.

The first business of the two whose aims and objectives I will be focussing on is RyanAir. During this task, I was able to gather much substantial secondary data regarding the aims & objectives of RyanAir. Based on what I wrote earlier in this assignment and the type of business RyanAir are along with their advertising, I am estimating that most of Ryan Air's objectives will be centred around saving money. During my research, I was able to discover the a section of the strategy document that RyanAir presents which includes in sentences rather than a list, some of their aims and objectives. It read as follows: ''Ryanair's objective is to firmly establish itself as Europe's leading low-fares scheduled passenger airline through continued improvements and expanded offerings of its low fares service. Ryanair aims to offer low fares that generate increased passenger traffic while maintaining a continuous focus on cost-containment and operating efficiencies.'' - Taken from GCE A2 Level Applied Business textbook. From this small passage, there are around 3 or 4 sections that can be taken out and be named as aims and objectives. The coloured areas of the text is in my opinion what can be classified as aims and objectives as I have done in the small table below: Targets of RyanAir - To work in an efficient manner - To cut costs - Become established as Europe's leading low fare airline I will now be focusing strongly on the aims and objectives of RyanAir using a combination of my own personal opinion and secondary data. During this, I will be listing the aims of RyanAir, the objectives used to achieve these and be explaining the reasons behind having these aims and objectives. Below is a table I have created with the information regarding RyanAir's aims with the relevant objectives placed beside them: AIMS OBJECTIVES - Become established as Europe's leading low fare airline - Charge low fares - Ensure a commitment of safety - Have planes regularly checked and maintained ...read more.

In terms of domestic competition to RyanAir, I would have to say the most obvious that comes to mind is EasyJet and Fly Thompson. EasyJet & Fly Thompson, like RyanAir are low fare airlines that operate solely in Europe with a similar target market (European passengers looking for a cheap and efficient flight). Simply because of this, along with them being based in the UK and being two of the largest low-fare airlines in Europe, they have to be classed as the two main serious domestic competition for RyanAir. In terms of the overseas market, yet again just like British Airways, the competition rapidly rises. When looking for the overseas competition of RyanAir, the criteria involving the target market and product range will remain unchanged, however I am now looking for businesses across Europe. Some low-fare airlines which could be named as overseas competition for RyanAir are the likes of Sky Europe (Slovakia), SnowFlakes Airlines (Sweden & Denmark), Virgin Express (Belgium), WizzAir (Hungry) and AirBerlin(Germany).Out of all of these, the main competition most likely comes from AirBerlin because not only are they one of the lowest charging airlines in the world but they are also one of the world's largest low fare airline so for that reason, they are probably the main overseas competition of RyanAir. In contrast to British Airways, the domestic market probably provides more of a challenge to RyanAir than the overseas market because despite EasyJet being the highest level of competition for RyanAir within the UK and AirBerlin being the highest in Europe (outside UK), EasyJet are actually the second largest low fare airline in the world whilst AirBerlin are ranked 3rd. Despite of all of this, I believe RyanAir deal with their competition very well because not only do they stick to their aim which is to be Europe's leading low fare airline, they are also the largest low fare airline in the world - so for this they must be doing something better than their competition. ...read more.