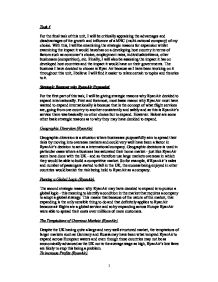 Task 4 For the final task of this unit, I will be critically appraising the advantages and disadvantages of the growth and influence of a MNC (multi-national company) of my choice. With this, I will be examining the strategic reasons for expansion whilst examining the impact it would have/has on a developing host country in terms of factors such as consumer's choice, employment rates, individuals/citizens, other businesses (competition), etc. Finally, I will also be assessing the impact it has on developed host countries and the impact it would have on their governments. The business I have decided to choose is Ryan Air because as I have been working on it throughout this unit, I believe I will find it easier to relate certain to topics and theories to it. Strategic Reasons why RyanAir Expanded For the first part of this task, I will be giving strategic reasons why RyanAir decided to expand internationally. First and foremost, most basic reason why RyanAir must have wanted to expand internationally is because that is the concept of what flight services are, going from one country to another consistently and safely and as this is RyanAir's service there was basically no other choice but to expand. However. Below are some other basic strategic reasons as to why they may have decided to expand. Geographic Diversion (RyanAir) Geographic diversion is a situation where businesses purposefully aim to spread their risks by moving into overseas markers and could very well have been a factor in RyanAir's decision to act as a international company. Geographic decisions is used in particular cases where a business has saturated their home market - just like RyanAir seem have done with the UK - and so therefore use large markets overseas in which they would be able to build a competitive market. ...read more.

all the businesses try to compete and gain the largest customer base and the largest market share so prices fall considerable in order for this to be achieved. Along with this, people living in Eastern Europe live in developing countries such as Bosnia and Serbia (2nd world countries) and so the average wage of the population would be considerably lower than that of those living in Eastern Europe and so because of this an increase in customer choice which is what RyanAir would bring in terms of flights would increase the likelihood of prices of flights falling because it is increased competition and so this would be more valuable to those with lower average wages - Eastern Europeans especially with a business like RyanAir who already offer cheap flights naturally. So to summarise, RyanAir operating in developing countries such as these would definitely be hugely beneficial to the people because not only do they get a wider choice to choose from, but this would also result in lower flights for them which is great all round and could not have been achieved had RyanAir never became an MNC. Employment Employment is another factor that would definitely be affected by RyanAir operating in developing European countries and in a very positive way. One of the factors that possibly block developing countries from reaching their full potential is unemployment levels. Put very simply, RyanAir operating in countries like these would not only benefit RyanAir but also the countries themselves because with their introduction and existence across parts of the countries, then this opens up a whole new range of jobs which can only be taken by citizens of those countries without harming the position of anyone else's jobs. ...read more.

Consumer Choice The increase in consumer choice that the existence of RyanAir would provide in developed host countries would be hugely beneficial to individuals living in those nations. In more economically developed countries such as England and France, prices of flights are likely to be higher because the average wage and average standard of living are higher and thus this is reflected within the prices of everyday goods and services sold within these nations causing individuals to pay possibly more for their flights than those living in Bosnia, Lithuania or Luxemburg would. However, as I mentioned before a company like RyanAir is one who focuses on providing on low prices so a firm like their's would be hugely appreciated by those living in countries where the usual price for flights is high such as developed countries along with giving them a healthier choice to choose from at the same time. Environment Even though well developed countries hold many advantages of lesser countries, because of their enormous production of things such as planes and cars they do tend to cause problems upon themselves such as pollution and noise pollution and with RyanAir working in these countries, this would only add to these two problems. Those living near airlines not just in the UK but across Europe are disturbed every day by the noise pollution caused by aircrafts and do with RyanAir means extra aircrafts and therefore extra noise pollution for those suffering the most. Along with this, the problem of normal pollution is added. The problem of pollution seems to occur within the more developed countries because they have to the extra resources to be much more efficient and effective in production of the things that create pollution and again by allowing a country to host an airline such as company although ...read more.