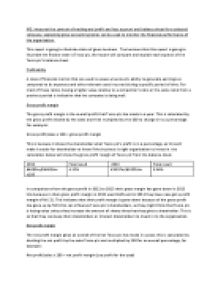 Unit 2 M3 Interpret the content of trading and profit and loss account and balance sheet for a selected company, explaining grow accounting ratios can be used to monitor the financial performance of the organisation.

﻿M3: interpret the content of trading and profit and loss account and balance sheet for a selected company, explaining grow accounting ratios can be used to monitor the financial performance of the organisation. This report is going to illustrate state of given business. The business that this report is going to illustrate the finance state is Tesco plc, the report will compare and explain each aspects of the Tesco plc?s balance sheet. Profitability A class of financial metrics that are used to assess a business's ability to generate earnings as compared to its expenses and other relevant costs incurred during a specific period of time. For most of these ratios, having a higher value relative to a competitor's ratio or the same ratio from a previous period is indicative that the company is doing well. Gross profit margin The gross profit margin is the overall profit that Tesco plc has made in a year. This is calculated by the gross profit divided by the sales and then multiplied by the 100 to change in to a percentage. For example: Gross profit/sales x 100 = gross profit margin This is because it shows the shareholder what Tesco plc?s profit is in a percentage, as this will make it easier for shareholder to know if the business is right organisation to invest in. ...read more.

This is by £1146 million of money that Tesco were supposed to make in 2013. Return on capital employed Return on capital employed (ROCE) is a measure of the returns that a business is achieving from the capital employed, Capital employed equals a company's Equity plus Non-current liabilities (or Total Assets − Current Liabilities), the long-term funds used by the company. ROCE indicates the efficiency and profitability of a company's capital investments. Net profit/capital employed x 100 = Return on capital employed This will allow Tesco plc to show an overall loss and profit taken into account on their balance sheet, this the actual profit after working expenses not included in the calculation of gross profit have been paid. 2013 Final result 2012 Final result £120m/£31.144m x100 0.39% £2814m/£31532m x 100 8.92% In comparisons from the calculation in 2012 to 2013 their Return on capital employed has gone down in 2013 than in 2012, this is because Tesco plc.’s current assets have increased and the net profit have decreased in 2013, Solvency ratios The solvency ratio is a measure of the risk an insurer faces of claims that it cannot absorb. The amount of premium written is a better measure than the total amount insured because the level of premiums is linked to the likelihood of claims. ...read more.

2013 Final result 2012 Final result £14483m/£31.144m x 100 46.50% £13731m/£31532m x 100 43.55% In comparisons from the calculation in 2012 to 2013 their Return on capital employed has gone down in 2013 than in 2012, this is because Tesco plc.’s current assets have increased and the net profit have decreased in 2013. Shareholders A shareholder or stockholder is an individual or institution that legally owns a share of stock in a public or private corporation. Shareholders are the owners of a limited company. They buy shares which represent part ownership of a company. Dividend per share (DPS) The DPS shows the amount of shares that shareholders get 2013 2012 14.76p 14.76p The dividend per share in Tesco plc is hasn’t changed in 2013 and 2012 at 14.76p. This indicates that Tesco plc has maintained the dividends between their shareholders as they want to keep their shareholders In conclusion, the aspects of each finance statement used on the balance sheet gives indication of what Tesco plc uses to calculate their finance in to a ratio to get a more precise result from the calculation. From the calculation from the aspect on the balance sheet in 2013 and 2012, shows a clearer visual of what has decreased and increased for example, Tesco plc current ratios has increased in 2013 than in 2012, however profit margins has decreased in 2013 than in 2012 ...read more.