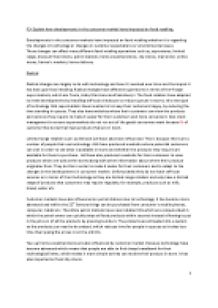 Unit 32 P3 Explain how developments in the consumer market have impacted on food retailing.

﻿P3- Explain how developments in the consumer market have impacted on food retailing. Developments in the consumer markets have impacted on food retailing whether it is regarding the changes in technology or changes in customer expectations or environmental issues. These changes can affect many different food retailing operations such as; superstores, limited range, discount food stores, petrol stations, home essential stores, city stores, mail order, online stores, farmer?s markets, home delivery. Radical Radical changes are largely to do with technology and how it?s evolved over time and the impact it has had upon food retailing. Radical changes have affected superstores in terms of the 4 large super markets, which are Tesco, Asda, Morrisons and Sainsbury?s. The food retailers have adapted to meet developments by installing self-scan checkouts to reduce queues in stores, this new type of technology that supermarkets have invested in to keep their customers happy, by reducing the time standing in queues. They also have websites where their customers can view the products and services they require to make it easier for their customers and more convenient. Also stock management to ensure supermarkets do not run out of the goods consumers want because % of customer like stores that have products that are in stock. Limited range retailers such as Aldi and Lidl have also been influenced. This is because there are a number of people that use technology. Aldi have produced a website where potential customers can visit in order to see what is available in store and whether the products they require are available for them to purchase. Lidl have also produced a website for their customers to view products which are sold at the stores along with other information about where their produce originates from. They do this in order to make it easier for their customers and to adapt to the changes in the developments in consumer market. ...read more.

Superstores have adapted to this by opening 24 hours for those who either work days so can do their shopping at night or those who work nights can do day shopping so it can fit around everyone?s schedule. Changing social and working patterns have influenced discount food stores have expanded because of those who have a low incomes end after the recession to help them get the same quality of food but at an affordable price. They do this by providing discounted affordable food with quality to those who cannot afford high prices of superstores. Their working pattern does not consist of 24 hours as they may be independent opened stores. Petrol stations have been influenced because many have expanded upon the range of products they sell. They have also introduced coffee machines and partnerships with Subways, Spar shops etc. The change in working pattern for this is that petrol stations have adapted to stay open 24 hours as at the middle of the night some may require food and drink as well as fuel so having small stores open within the petrol stations is cheaper to run as they hold the same variety of products in a normal superstore and more convenient if it?s a popular petrol station. Home essential stores have also been influenced. This is because people have different lifestyles and ways of living so they ensure they have every different type of product. This can be dependent on region for example in Bradford a lot of home essential stores sell spices to use in Asian food. Mail order has also been impacted. This is because busy people may order their food via mail making it easier for them to collect as they may require a special type of food products. Customers can also order 24 hours a day. This also means it means to purchase specialist food products. Consumers use online methods as they want better quality goods. ...read more.

They have adapted to reducing waste by keeping things that are more commonly demanded for everyday use. Environmental issues have influenced city stores. This is due to the wastage they gather in terms of packaging as well as food which doesn?t sell especially those with short life. Although they may be busy they will still have some waste so they have adapted this by only getting a certain amount of stock in order to reduce waste per week. Mail order has also been impacted. This is due to carbon emissions. Therefore they have adapted this development by having the parcels sent to the owner by region/ city so the vehicles don?t have to travel far and won?t produce a lot of carbon emission. Online stores have also been impacted. This is due to them delivering the package which makes carbon emissions along with packaging waste. Therefor they have adapted their thinking in delivering just like mail order from the closest city or region. Farmers markets have been influenced such as the carbon emission from the machinery. In order to adapt to avoiding carbon emissions they have started to hand pick veg and fruit which do not require machinery to avoid producing Co2 as they do that when travelling to markets to sell. Home delivery has been impacted in the obvious state of producing carbon emissions. Therefore they have adapted to use small vans instead of big trucks to reduce carbon emissions but also sending the orders out from local stores so fuel isn?t used up quickly and carbon emissions are lowered. In conclusion, developments in consumer markets have impacted on food retailing whether it is a big development or small, they are influence. Many retailers have had to change plans in the way they transport goods and well as how they would meet customer expectations and adapt to changing society. This all has to be done to match everyone?s taste in order to make customers happy. Also they must always be aware of such developments if food retailers are to give the customer what they want and remain successful. ...read more.