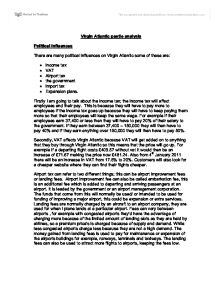 Virgin Atlantic pestle analysis Political influences There are many political influences on Virgin Atlantic some of these are: * income tax * VAT * Airport tax * the government * import tax * Expansion plans. Firstly I am going to talk about the income tax; the income tax will affect employees and their pay. This is because they will have to pay more to employees if the income tax goes up because they will have to keep paying them more so that their employees will keep the same wage. For example if their employees earn 37,400 or less then they will have to pay 20% of their salary to the government. If they earn between 37,400 - 150,000 they will then have to pay 40% and if they earn anything over 150,000 they will then have to pay 50%. Secondly, VAT affects Virgin Atlantic because VAT will get added on to anything that they buy through Virgin Atlantic so this means that the price will go up. For example if a departing flight costs �409.57 without vat it would then be an increase of �71.67 making the price now �481.24. Also from 4th January 2011 there will be an increase in VAT from 17.5% to 20%. Customers will also look for a cheaper website where they can find their flights cheaper. Airport tax can refer to two different things; this can be airport improvement fees or landing fees. Airport improvement fee can also be called embarkation fee, this is an additional fee which is added to departing and arriving passengers at an airport. It is leaded by the government or an airport management corporation. The funds that come from this will normally be used/ or intended to be used for funding of improving a major airport, this could be expansion or extra services. Landing fees are normally charged by an aircraft to an airport company, they are used for when I plane lands at a particular airport. ...read more.

This also shows how comfortable people are with spending money, affecting this is how confident people are about the stability of their incomes which in turn determines their shopping habits. For example[le is the economy expanded , this causes the consumer confidence to be higher meaning consumers will be spending more so Virgin can afford to raise their prices slightly as they will be making a profit. On the other hand if the economy was in bad shape the consumer confidence is lower and people will tend to save more and spend less Social and Cultural influences Social and cultural influences have will have a major effect on Virgin Atlantic as there are always more people getting interest in travelling every day. Some of the effects on Virgin Atlantic are: * Change in consumer tastes * Population changes * ethical value * Levels of education * demographics A change in consumer taste can easily be changed as if Virgin Atlantic were to get feedback from their customers they would then be sure to be able to make changed within the company according to the data they gathered. Another way a change can affect a business is because people aspire to have a better quality and aspire to move up the social ladder. A change in consumer taste would affect Virgin Atlantic because consumers would want to be able to fly to more places. This will vary from person to person and this will affect where Virgin Atlantic Fly to in future. Population change would affect Virgin Atlantic hugely. This is because if people started to move into the countries where they operate from then they would have a higher increase in profit. Also population change would affect Virgin Atlantic as they would have a larger choice of applicants to choose from on job vacancies. Also Virgin Atlantics market at the moment are the baby boomers as they are the ones which are higher in the economy market as they have most money , so ...read more.

An example of when Virgin Atlantic are advertising they will use direct responses, sales promotions , and these combine to provide clarity, consistency and maximum communication. Virgin Atlantic use a wide range of marketing techniques some of these are direct mail, press, billboards, all featuring their distinctive logo , the flying lady. They use advertising to raise awareness of new product developments and to inform customers about new routes forming. An example of when they used this is was on NBC when the television series "friends" when showed during the primetime showed Richard Branson with all the characters flying on Virgin Atlantic to London. There are many regulations about advertising throughout Europe as well as in many non-western countries. A wide variety of linguistic and non-linguistic strategies are used to mock and undermine regulations. . Environmental influences Environmental influences are something that all business cannot get away from. Some of the environmental influences that affect virgin Atlantic are: * Pollution laws * Waste disposal laws. * Recycling * Pressure groups Pollution laws Pollution laws are part of the national air quality strategy for england,scotland, wales and northern island. They set out the national standard and objectives to reduce air pollution and levels of health- threating pollutions. Pollution laws would affect Virgin Atlantic because this will stop them from having as many flights take off and land , as the orgizination that sets the national strategy and objectives sets a target for what they want the air pollution to reduce down too. This in turn will also reduce profit as Virgin Atlantic are having to keep to the target set and not let as many flights take off. Waste disposal laws Environmental Protection Act 1990 Environment Act 1995 Business must have a safe and legal method of disposing of their waste. One of the choices which is not acceptable is burning of your business waste. It may seem easy to take short cuts. The Council has a duty to enforce the law. We have an Enforcement Policy on how we will deal with those who fail to comply with the law. ...read more.