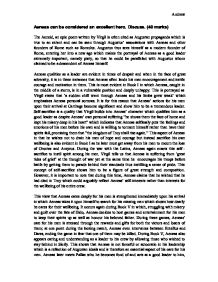 Aeneas can be considered an excellent hero. Discuss.

Aeneas can be considered an excellent hero. Discuss. (40 marks) The Aeneid, an epic poem written by Virgil is often cited as Augustan propaganda which is true to an extent and can be seen through Augustus' associations with Aeneas and other founders of Rome such as Romulus. Augustus thus sees himself as a modern founder of Rome, entering her into a new age which makes the portrayal of Aeneas as a good leader extremely important, namely piety, so that he could be paralleled with Augustus whom claimed to be a descendent of Aeneas himself. Aeneas qualities as a leader are evident in times of despair and when in the face of great adversity, it is in these instances that Aeneas often lends his men encouragement and instils courage and motivation in them. This is most evident in Book I in which Aeneas, caught in the middle of a storm, is in a vulnerable position and deeply unhappy. This is portrayed as Virgil states that 'a sudden chill went through Aeneas and his limbs grew weak' which emphasises Aeneas personal sorrows. It is for this reason that Aeneas' actions for his men upon their arrival at Carthage become significant and show him to be a tremendous leader. Self-sacrifice is a quality that Virgil builds into Aeneas' character which qualifies him as a good leader as despite Aeneas' own personal suffering "he shows them the face of home and kept his misery deep in his heart" which indicates that Aeneas selflessly puts the feelings and emotions of his men before his own and is willing to torment himself rather than have their spirits fail, promising them that "the kingdom of Troy shall rise again." ...read more.

In the Augustan Age, the concept of piety, especially religious piety, was seen to be an essential quality in leadership which Augustus often displayed through his restoration of temples such as that of Mars Ultor. Aeneas too is renowned for his pietas which he shows to his family, follwers, country and to the Gods. Aeneas' piety is evident throughout, being referred to by Virgil as "the devout," "the dutiful" or "Pies Aeneas" and can be seen clearly when Aeneas introduces himself to a disguised Venus, announcing himself as "Aeneas, known for my devotion." Aeneas' men also speak highly of his pietas which shows him to be a good leader and role model for them, giving them an example to follow, describing him as "Our king Aeneas, he had no equal for his piety and his care for justice." Aeneas often makes prayers to the Gods in times of need such as when he discovered the burning ships of Troy and prays immediately to Jupiter; he also sacrifices to them and makes libations to the blessed Gods such as when he sacrifices the sow in the name of "O greatest Juno" which would indicate that he has great pietas. Aeneas is constantly focussing on the spiritual which is most clear in Book VI in which on arrival to Cumae his men search for practical items such as flint and water but Aeneas is focused primarily on worship which is seen by his immediate journey to the temple of Apollo which is cemented by the epithet "Devout." ...read more.

In conclusion, I believe that Aeneas proves himself to be an invaluable leader both in the context of his soldiers and in the context of his role as pater patriae and pater familias. With his men he makes countless self-sacrifices, instilling spirit into their hearts despite his own misery, the most significant example of this being in Book I when he promises them that "Troy shall rise again" despite his own transgressions. Aeneas also physically provides for them with the seven stags and Anchises' wine and at points even goes out of his way to entertain them and comfort them which is seen during the funeral games in which all contestants received a prize. Aeneas can also be viewed as a good leader in his role as pater familias due to how he clearly cares for both his son and father, although the extent to which he cared for his wife Creusa is still questionable. Aeneas' sacrifice of his personal emotions in order to fulfil his destiny is what gives him the title of pater patriae over the nation of Troy and Rome and is most notable when he leaves Dido in order to continue his journey to Latium. Aeneas can thus be seen to not only be a good leader to his men but also in the eyes of a Roman audience whom would respect his pietas for his followers, family, country and Gods. Portraying Aeneas as a good leader and hero was unarguably important to Augustus whom wished to equate himself with Aeneas in terms of leadership as a source of Auctoritas and propaganda. ?? ?? ?? ?? Andrew ...read more.

This is a thorough response to a prompt to discuss how far Aeneas could be considered a hero in the Aeneid. The candidate skilfully accomplishes this, discussing the main values and characteristics of the Aeneid, such as pietas and Aeneas’ ...

This is a thorough response to a prompt to discuss how far Aeneas could be considered a hero in the Aeneid. The candidate skilfully accomplishes this, discussing the main values and characteristics of the Aeneid, such as pietas and Aeneas’ role as pater patriae and paterfamilias. The candidate uses this discussion of Aeneas subordination of personal desires and ambitions to a greater, patriotic one to elaborate on the propagandistic value of the poem in the Augustan era and how this contributes to Aeneas’ portrayal as heroic by Virgil. The candidate makes use of ample quotation from the original text to make his or her argument and frames it within a clearly structured essay marked out with a strong introduction and conclusion.

The level of analysis in this essay is of a high standard. In each paragraph the candidate sets out an argument, backs it up with evidence from the text and then draws his or her conclusion. As mentioned above, there is comprehensive discussion of the major themes of the Aeneid at a level appropriate for A level. However, one area the candidate could have considered more closely was the opposite side of the argument – in what ways did Aeneas not show heroic qualities? In discursive essays it can make your argument more convincing if you set out the arguments to the contrary and then argue against them. The candidate does this to a limited extent, discussing Aeneas’ treatment of Creusa and his relationship with Dido, which could be expanded on. Perhaps the candidate could have considered how Roman interpretations of his treatment of Creusa and Dido might differ from modern ones, which have the benefit of exposure to feminism and the women’s rights movement. In general, however, this essay successfully conveys how Virgil has made Aeneas into an heroic character through his scrupulous pietas and other values and qualities and would be deserving of a high grade at A level.

The quality of writing in this essay is of a high standard. There are no obvious spelling, grammar or punctuation mistakes, and the essay is written in a style which flows well and is easy to follow. The candidate’s arguments are set out in a clear fashion and within the framework of a well-structured essay.