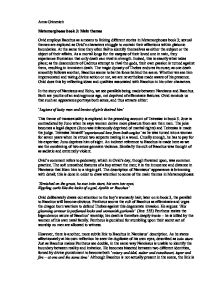 Anna Grinevich Metamorphoses book 3: Main themes Ovid employs Bacchus as a means to linking different stories in Metamorphoses book 3; sexual themes are explored as Ovid's characters struggle to contain their affections within platonic boundaries. At the same time they often fail to identify themselves as either the subject or the object of their affairs. As a mortal longs for the corpus of their loved one in vain, they experience frustration that only death can rival in strength. Indeed, this is exactly what takes place; as the descendents of Cadmus attempt to rival the gods, their own passion is turned against them, resulting in imminent death. The tragic dynasty of Thebes endures its curse; as one death smoothly follows another, Bacchus seems to be the force behind the scene. Whether we see him impersonated and taking divine action or not, we are nevertheless made aware of his presence. Ovid does this by reflecting ideas and qualities associated with Bacchus in his other characters. In the story of Narcissus and Echo, we see parallels being made between Narcissus and Bacchus. Both are youths of an androgynous age, not deprived of effeminate features. ...read more.

The latter endures divine punishment: Echo distracts Juno while Jupiter chases after nymphs and is consequentially deprived of independent speech. Narcissus, a pre-pubescent boy who has previously rejected many admirers, goes hunting and encounters Echo's voice, as she repeats his last words. Ovid presents the account as an actual conversation, this is seen in the latin: 'ecquis adest? et 'adest' (Narcissus says 'who is present' and 'present!' replies Echo). The juxtaposition of the same verb adest (adeo, adere - present) naturally emphasizes its multiple meanings that come with the change of speaker. When describing this exchange Ovid uses the word imago (means both echo and reflection) thus referring to the double nature of a misleading, aural and visual reflection. This reference provokes us to think about the recurring theme of misleading identities as Narcissus struggles to identify the object of his sexual desire as himself. We witness the interchangeable roles of the subject/object of a love affair, and the tentative boundary between the desirer and the desired. In the case of Narcissus, this boundary is two-dimensional: 'all that keeps us apart is a thin, thin line of water'. ...read more.

The paleness of the flower reminds us of Narcissus' originally pale, untouched and pure skin. Once again, we are able to sense Bacchus' presence who himself is often described as a pale young boy. Book 3 is entirely devoted to Bacchus, and every story, whether part of the main narrative or not, reflects the deity's powerful influence. Bacchus is shown to be the god of many things; his presence is constantly tangible throughout book 3 as each theme Ovid touches upon can be traced directly back to Bacchus. Each of these ideas, whether it involves identity, gender, boundaries or tangibility all have one thing in common: Bacchus is able to transgress them. The extent of Bacchus' power becomes apparent to us as we come to realize Bacchus' divine ability to flow back and forth between reality and illusion; this is what makes him present in all accounts. Book 3 is rich with the deaths of Cadmian descendents, in fact the sheer number and predictability of these mortalities dulls our moral judgment. Instead of shock we develop a fascination with Bacchus' violent revenge on his own family, and this is perhaps the most striking aspect of experiencing the narrative: we forget our own moral principles, because the spectacle itself is so strikingly multi-dimensional. Word count: 1547 ...read more.