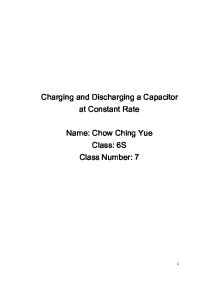 Charging and Discharging a Capacitor at Constant Rate

Resistance of digital voltmeter is not infinity Precautions 1. Take repeated readings and averaging to reduce systematic errors 2. Do not put the capacitor near any conductors to reduce stray capacitance 3. Select only one student for recording data Suggestions for improvements 1. Use data logger to collect data 2. Use electronic device to keep the current constant Comparison of result with that expected From the experimental result, four values of capacitance C obtained are 2366 � 78�F, 2267 � 78�F, 2281 � 75�F and 2267 � 100�F respectively, while the actual value of the capacitance C is 2200�F. The obtained values of 4 experiments are all higher than the expected value. This is because the there are errors existed during experiments, such as stray capacitance, reading errors, ammeter and voltmeter were not ideal. I. Conclusion By collecting data from 4 experiments, the average capacitance C is: C = [(2366 � 78�F) + (2267 � 78�F) + (2281 � 75�F) + (2267 � 100�F)] / 4 = 2295 �A Error = (2295 - 2200) / 2200 x 100% = 4.33% From the experiment, we can find that the current of charging and discharging can be kept constant by adjusting the resistance of the variable resistance. Also, form experiment 2 & 4, straight lines passed through origins are obtained in the graphs of Q against V. therefore, the voltage across a capacitor is proportional to the charged stored in it. Compare with the actual value of capacitance C, the experimental result C is higher than the actual one because of the presence of errors in the experiment. ?? ?? ?? ?? 1 ...read more.