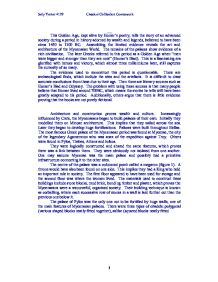 The Mycenaean Age To what extent can we reconstruct the palace civilisation of Mycenae? What does the evidence tell us about their society and how they lived? This Golden Age, kept alive by Homer's poetry, tells the story of an advanced society during a period in history adorned by wealth and legends, believed to have been circa 1450 to 1100 BC. Assembling the limited evidence reveals the art and architecture of the Mycenaean World. The remains of the palaces show evidence of a rich civilisation. The later Greeks referred to this period as a Golden Age when "men were bigger and stronger than they are now" (Homer's Iliad). This is a fascinating era glorified with heroes and victory, which almost three millenniums later, still captures the curiosity of so many. The evidence used to reconstruct this period is questionable. There are archaeological finds, which include the sites and the artefacts. It is difficult to draw accurate conclusions from these due to their age. Then there are literary sources such as Homer's Iliad and Odyssey. The problem with using these sources is that many people believe that Homer lived around 700BC, which means the stories he tells will have been greatly adapted to his period. Additionally, others argue that there is little evidence proving that the books are not purely fictional. Architecture and construction proves wealth and culture. Increasingly influenced by Crete, the Mycenaeans began to build palaces of their own. Initially they modelled them on Minoan architecture. This implies that they sailed across the sea. Later they began to develop huge fortifications. Palaces were built throughout Hellas. The most famous Greek palace of the Mycenaean period was found at Mycenae, the city of the legendary Agamemnon who was anax of the expedition against Troy. ...read more.

Both the Minoans and Mycenaeans believed in a mother goddess and a divine son, although their roles varied in each civilisation. The divine son became known as Zeus. There was also evidence of separate goddesses (e.g. Demeter, Artemis, Athena). Hera and Poseidon were also evident. The Myceneans had very few temples, which either suggests that the latter were not preserved or that these people did not worship the Gods in the same way as later Greeks. Another explanation is that temples were not an area for meeting and for worship but the palaces were. Some historians suggest that the megaron had some religious significance. It is also believed that they sacrificed animals, which can reasonably be interpreted as a religious practice. The shaft graves mark the beginning of the Mycenaean Age. They were a more developed version of the cist graves. Shaft graves were three to four meters deep with a layer of pebbles on the bottom, rubble walls and a wooden roof. It was then covered up with earth and marked with a large stone. Tholos (beehive) tombs succeeded the shaft graves. These were chambers cut into hills and then covered after burial (figure 8). The most prestigious tholos tombs found at Mycenae consisted of dromos lined with ashlar cut masonry, interior walls of coursed and cut masonry and ashlar dressed doorways. These took a lot of skill and construction and presumably used a lot of labour and were planned in advance for kings and heroes. I assume tholos tombs were for the aristocratic people because the skeletons were either adorned by jewellery positioned at the neck and wrists, or they had weapons at their side. ...read more.

The sites and artefacts confirm that the Mycenaeans were a rich civilisation that took part in trade and war. The population was concentrated in and around the palaces. There is undeniable reality behind the palace culture. They appeared to have a social ranking: from royals, to nobles, to ordinary people. Craftsmen produced a range of art, pottery and tools and their building constructions were outstanding. They were good sailors and warriors. Rightfully, the myths and legends prolonged their glorified memory, as it is known today as the Golden Era. In conclusion, here is what we can reasonably deduce about these people. First, they were a rich society, because they had the time, skill, wealth and organisation to build palaces. They also produced pottery for decoration (the Warrior's Vase, page 6), not just for carrying water, which shows their artistic skill. Second, as the quote on page 5 says, literacy means civilisation. The tablets on page 6 prove they wrote things down: making them a civilised society. Third, they were a feudal society with a regimented class system. Circle Grave A, page 7, shows a series of shaft graves, where families were buried together with their treasures. The tholos tomb, also on page 7, is even more prestigious and exclusive to royals and heroes. Fourth, they seem to have been war-like people, as we have seen from the Trojan War in Homer's Iliad and from the defensive walls built around the cities (see the Cyclopean Walls, page 4) and the cisterns built to access water during a siege (described page 3, illustrated page 4). Fifth, they were tradesmen and therefore also sailors. We have evidence that they mined to find bronze (page 9), which was then used for weaponry and export. They also traded pots and vases, which have been discovered as far as Italy and Asia Minor (see page 3). ...read more.