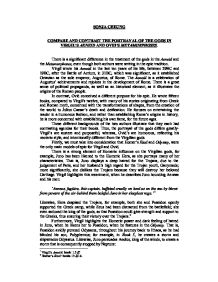 Compare and contrast the portrayal of the Gods in Virgil's Aeneid and Ovid's metamorphoses.

SONJA CHEUNG COMPARE AND CONTRAST THE PORTRAYAL OF THE GODS IN VIRGIL'S AENEID AND OVID'S METAMORPHOSES. There is a significant difference in the treatment of the gods in the Aeneid and the Metamorphoses, even though both authors were writing in the epic tradition. Virgil wrote his Aeneid in the last ten years of his life, between 29BC and 19BC, after the Battle of Actium, in 31BC, which was significant, as it established Octavian as the sole emperor, Augustus, of Rome. The Aeneid is a celebration of Augustus' achievements and rejoices in the development of Rome. There is a great sense of political propaganda, as well as an historical element, as it illustrates the origins of the Roman people. In contrast, Ovid conceived a different purpose for his epic. He wrote fifteen books, compared to Virgil's twelve, with many of his stories originating from Greek and Roman myth, concerned with the transformations of shapes, from the creation of the world to Julius Caesar's death and deification. He focuses on entertaining the reader in a humorous fashion, and rather than establishing Rome's origins in history, he is more concerned with establishing his own fame, for the future ages. These different backgrounds of the two authors illustrate that they each had contrasting agendas for their books. Thus, the portrayal of the gods differs greatly-Virgil's are austere and purposeful, whereas, Ovid's are humorous, reflecting his neoteric style, and intentionally different from the Virgilian gods. ...read more.

That is, the gods do not always stay in Olympos, but they frequent the earth, for example, Venus is depicted, lying on Adonis' chest, on the grass and shaded by a poplar tree.10 There is an intimacy between the mortals and the immortals, as there is informality between the two realms. However, in the Aeneid, the gods are portrayed as being more aloof, as they generally stay in heaven and socialise with their own. For example, Juno and Venus plot the marriage of Dido and Aeneas together, from heaven. The gods make decisions and view mortal actions from the comfort of heaven, which illustrates the strong divide between the gods and mortals. This also portrays them in a more formal light, as they remain mysterious and awesome. Furthermore, it can be noted that the gods, in the Aeneid, rarely appear to the mortal characters. For example, Venus disguises herself as a huntress, when she approaches Aeneas, to tell him that he is in Carthage, and only afterwards does he realise that she is his mother: 'You! Cruel too! Why tease your son so often with disguises?'11 In comparison, the Ovidian gods generally appear as themselves, illustrated by the examples of Apollo, Mercury and Venus, which highlights the informality surrounding the gods. However, if they do not appear in their human forms, they are then presented in animal forms. For example, Jupiter is depicted as a bull, firstly, to Io and then to Europa, in order to rape them. ...read more.

This is highlighted in the reconciliation scene, when Jupiter reiterates that she is his sister and his consort, which establishes the importance of her role; as well as yielding to her desires, that the new race founded by Aeneas, will not bear the Trojan name and language. Once she has fulfilled the role of satisfying her divine pride, she leaves fate to run its course: 'To all this Juno nodded in assent and, gladdened by his promise, changed her mind. Then she withdrew from sky and cloud.'18 In conclusion, we can note that both the Virgilian and Ovidian gods have similar attributes-they are immoral, callous towards humans and they live within their divine rules, without consideration for the consequences of their actions. However Virgil and Ovid portray these aspects differently. Firstly, Virgil dismisses the gods' negative aspects and focuses on their awesome, powerful and Homeric features. This serious portrait of the gods would have reflected positively on Augustus and his growing empire, as he frequently linked himself with the gods. Moreover, the role of the Virgilian gods was to establish the history of Rome, therefore Virgil had to portray them in a respectable light. On the other hand, Ovid focuses on the humorous side of the gods, and emphasises their worst traits. Ovid's purpose for his epic was to entertain the reader, therefore he portrayed his gods less seriously. It is also significant that he has intentionally broken away from the stereotypical austere images of the gods, and has set his gods at the opposite end of the scale to the Virgilian gods. ...read more.