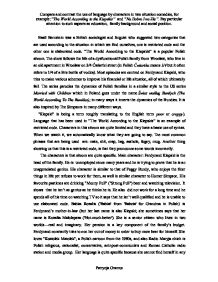 Compare and contrast the use of language by characters in two situation comedies, for example: The World According to the Kiepskis and Na Dobre I na Ze. Pay particular attention to such aspect

Basil Bernstein was a British sociologist and linguist who suggested two categories that are used according to the situation in which we find ourselves, one is restricted code and the other one is elaborated code. "The World According to the Kiepskis" is a popular Polish sitcom. The show follows the life of a dysfunctional Polish family from Wroclaw, who live in an old apartment in Wroclaw on 3/4 Cwiartki street (in Polish Cwiartka means 1/4 but it often refers to 1/4 of a litre bottle of vodka). Most episodes are centred on Ferdynand Kiepski, who tries to make various schemes to improve his financial or life situation, all of which ultimately fail. The series parodies the dynamics of Polish families in a similar style to the US series Married with Children which in Poland goes under the name Swiat wedlug Bundych (The World According To The Bundies); in many ways it inverts the dynamics of the Bundies. It is also inspired by The Simpsons in many different ways. "Kiepski" is being a term roughly translating to the English term poor or crappy). ...read more.

Babka Rozalia ('Babka' from 'Babcia' for Grandma in Polish) is Ferdynand's mother-in-law (but her last name is also Kiepski; she sometimes says that her name is Rozalia Malolepsza ('Not-much-better'). She is a senior citizen who lives in two worlds-real and imaginary. Her pension is a key component of the family's budget. Ferdynand constantly tries to con her out of money in order to buy more beer for himself. She loves "Koziolek Matolek", a Polish cartoon from the 1980s, and also Radio Maryja chich is Polish religious, nationalist, conservative, anti-post-communists and Roman Catholic radio station and media group. Her language is quite specific because she cannot find herself in any of those two worlds, she is belonging to. Waldus is the 25-year old son of Ferdynand and Halina. Like his father he is unemployed. His life centers on bodybuilding or drinking beer with his father, and he avoids books and studying as much as he can. Waldus had problems with finishing elementary school, but after many attempts he succeeded. He equates to Kelly Bundy as he is the family's bumbling buffoon with his own share of "Kelly-isms". ...read more.

The reason for this is that they have a work experience and they attended to the best schools in the past. They also spend most of their time in a hospital so that they are under pressure of practising their language. To recap, I think that the difference between those two series and the language that is being used in both of them, is drastic. First sitcom is a typical example of the use of restricted code and the second one show how clever elaborated code might be represented. There are many factors influencing characters using any of these two codes. These are: education, family background and social position. As we can see, the main character of the first show, Ferdynand is unemployed and he does not use wider range of vocabulary while characters from "Na dobre I na zle" use it all the time. In that case, it is quite obvious that social position helps to develop our language. ?? ?? ?? ?? Compare and contrast the use of language by characters in two situation comedies, for example: "The World According to the Kiepskis" and "Na Dobre I na Zle". Pay particular attention to such aspects as education, family background and social position. Patrycja Oramus ...read more.