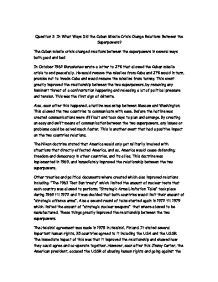 Question 3: In What Ways Did the Cuban Missile Crisis Change Relations Between the Superpowers? The Cuban missile crisis changed relations between the superpowers in several ways both good and bad In October 1962 Khrushchev wrote a letter to JFK that allowed the Cuban missile crisis to end peacefully. He would remove the missiles from Cuba and JFK would in turn, promise not to invade Cuba and would remove the missiles from turkey. This event greatly improved the relationship between the two superpowers, by removing any imminent threat of a confrontation happening and releasing a lot of political pressure and tension. This was the first sign of d�tente. ...read more.

Other treaties and political documents where created which also improved relations including: "The 1963 Test Ban treaty" which limited the amount of nuclear tests that each country was allowed to perform; "Strategic Arms Limitation Talks" took place during 1969 till 1972 and it was decided that both countries would limit their amount of "strategic offence arms", Also a second round of talks started again in 1972 till 1979 which limited the amount of "strategic nuclear weapons" that where allowed to be manufactured. These things greatly improved the relationship between the two superpowers. The Helsinki agreement was made in 1975 in Helsinki, Finland. It stated several important human rights, 35 countries agreed to it including the USA and the USSR. ...read more.

These conflicts include the USSR's invasion of Czechoslovakia and the USSR's deployment of troops in Afghanistan. Every conflict that the USA and the USSR were involved in caused their relationship to strain and made any chance of political co-operation happening slim. So, in conclusion to "In what ways did the Cuban missile crisis change the relations between the superpowers?"I think that overall it improved the relationship, there were some instances of events that caused the relationship to deteriorate, but, as a whole, I believe that the relationship was improved. I Believe the most important events were the political agreements and treaties that took place, such as the "Truman doctrine" and the "test ban treaty", they helped to keep the "cold war" cold. William Beauchamp ...read more.