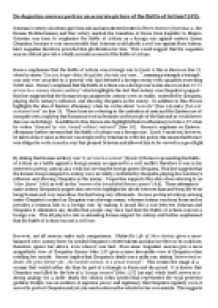 Do Augustan sources portray an accurate picture of the Battle of Actium?

﻿Do Augustan sources portray an accurate picture of the Battle of Actium? (45)- Octavian's victory at Actium gave him sole and uncontested control of Mare Nostrum (Our Sea, i.e., the Roman Mediterranean) and this victory marked the transition of Rome from Republic to Empire. Octavian was keen to emphasise the Battle of Actium as a foreign war against eastern Queen Cleopatra; because it was inconceivable that Octavian could glorify a civil war against Marc Antony, later Augustan literature provided this glorification for him. This would suggest that the Augustan sources did not provide a wholly accurate account of the Battle of Actium. Horace emphasises that the Battle of Actium was a foreign war in Epode 9; this is shown on line 21 when he states ?Can you longer delay the golden chariots and oxen??, meaning a triumph; a triumph was only ever awarded to a general who had defeated a foreign enemy with casualties exceeding 5,000 men. Horace?s emphasis that the Battle of Actium was a foreign war is also shown on line 12 ?in service to a woman Roman soldiery? which highlights the fact that Antony was Cleopatra?s puppet; this line suggests that the Roman troops assigned to Antony were, in reality, controlled by Cleopatra, playing down Antony?s influence and showing Cleopatra as the enemy. ...read more.

Horace portrayed Antony as being under Cleopatra?s control as Cleopatra was a foreign enemy, whereas Antony was from Rome and so provides a tenuous link to a foreign war; by making it sound like a war between Octavian and Cleopatra it eliminates any doubts that people may have had that the Battle of Actium was not a foreign war. This all played a role in alienating Roman support for Antony and further emphasised that the Battle of Actium was not a civil war. However, not all sources make such comparisons. Plutarch?s Life of Marc Antony gives a more balanced view; Antony knew he needed Cleopatra?s 20,000 talents and also her fleet so he could not, therefore, ignore her advice, even when it was bad. Even some ?Augustan? sources give a more sympathetic view of Cleopatra; Horace Odes 1.37 gives a more favourable view of Cleopatra when retelling her suicide. Horace implies that Cleopatra?s death was a noble one, stating ?determined on death, she grew fiercer yet?.No humble woman, in a proud triumph?. This creates the image of a woman that would rather die than be part of a triumph in Rome and die proud. ...read more.

Similarly, the denarius of 27 BC denotes the importance of the capture and annexation of Egypt; the crocodile on the reverse of the coin represents Egypt, with the words ?AEGVPTO CAPTA? written around it, meaning ?Egypt Captured?. The minting of all coins in Rome were controlled by the emperor and so were used as the primary form of propaganda. This suggests that coins are not a reliable Augustan source as it is Octavian who is in charge of how he wishes the Battle of Actium to be seen by the Roman people. The Arch of Augustus can also be taken as an unreliable source as, like the minting of the coins, building work was generally controlled by the emperor too. In conclusion, the weight of evidence tends to suggest that Augustan sources do not portray an accurate portrayal of the Battle of Actium. Sources such as Plutarch?s Life of Marc Antony provide a far more balanced view of the Battle than the sources such as Horace or numismatic evidence. This is most likely down to the fact the Augustan sources were either commissioned by Augustus himself or produced under his reign and therefore, could not provide an honest account of the Battle as it could result in heavy punishment for the perpetrator. ...read more.