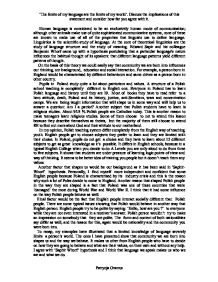 Human language is considered to be an exclusively human mode of communication; although other animals make use of quite sophisticated communicative systems, none of these are known to make use of all of the properties that linguists use to define language. Linguistics is the scientific study of language. At the core of theoretical linguistics are the study of language structure and the study of meaning. Edward Sapir and his colleague Benjamin Whorf came up with a hypothesis postulating that a particular language's nature influences the habitual thought of its speakers: that different language patterns yield different patterns of thought. On the basis of this theory we could easily say that community we are born into influences our thinking, our background, education and social interaction. For example, a person born in England would be characterised by different behaviours and same drives as a person born in other country. ...read more.

In my opinion, Polish teaching system differ completely from the English way of teaching youth. English people get to choose subjects they prefer to learn and they are limited with their choice. In Poland, pupils do not get a choice and they have to learn about 15 different subjects to get as great knowledge as it's possible. It differs in English schools, because in a typical English College when you decide to do A Levels you are only aloud to do from three to five subjects. It shows that students are under pressure of learning logic points of view and way of thinking. It seems to be better idea of training you people but it doesn't teach them any values. Another factor that shapes us would be our background as it has been said in 'Saphir-Whorf' hypothesis. ...read more.

Polish person wouldn't try to make an impression on somebody that they are polite. The form and content of both nationalities say differ as well, and the reason for this, again would be nationality and the community you were born into. To recap, my examples have illustrated that a limited knowledge of language severely limits a person's world. The ones I have presented show that community we are born into shapes us and the way we behave. It makes us other from English people who have to decide on how they are going to behave and what are their values, on their own and without any help. I agree with 'Saphir Whorf' hypothesis and I think that language we speak makes us who we are and what we do. ?? ?? ?? ?? 'The limits of my language are the limits of my world'. Discuss the implications of this statement and consider how far you agree with it. Patrycja Oramus ...read more.