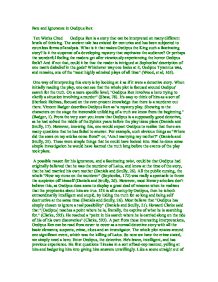 Fate and Ignorance in Oedipus Rex.

Fate and Ignorance in Oedipus Rex Ten Works Cited Oedipus Rex is a story that can be interpreted on many different levels of thinking. The ancient tale has existed for centuries and has been subjected to countless forms of analysis. What is it that makes Oedipus the King such a fascinating story? Is it the suspense of a developing mystery that captivates the audience? Or perhaps the wonderful feeling the readers get after vicariously experiencing the horror Oedipus feels? And if not that, could it be that the reader is intrigued at Sophocles' description of one man's disbelief in the gods? Whichever way one looks at it, Oedipus Tyrannus was, and remains, one of the "most highly admired plays of all time" (Wood, et al, 163). One way of interpreting this story is by looking at it as if it were a detective story. When initially reading the play, one can see that the whole plot is focused around Oedipus' search for the truth. On a more specific level, "Oedipus Rex involves a hero trying to clarify a situation involving a murder" (Shaw, 78). It's easy to think of him as a sort of Sherlock Holmes, focused on the ever-present knowledge that there is a murderer out there. Vincent Badger describes Oedipus Rex as "a mystery play. Showing to the characters on the stage the inexorable unfolding of a truth we knew from the beginning." ...read more.

The Greeks believed that the gods controlled all, that fate was what moved life. This is where you find the strong conflict in the story, where Oedipus' beliefs are tested. Bernard Knox says, "The play is a story of a man who rejects prophecy and therefore religion and who find out that he was wrong." (Clarke, 595). There is one character in Oedipus the King whose questioning of the gods is more apparent than others and whose strong beliefs change those around her; she is Jocasta, the wife and mother of Oedipus. Her feeling about the gods are quite contradicting at time. For example, she is seen praying to Apollo in hopes of saving the city and before her death she prays for forgiveness (Boyer, 1). At other times she seems quite adamant in denouncing the gods and their prophecies. Jocasta explains that the Delphic prophecy can not be true because of the original prophecy that had predicted her son would kill Laius and marry her. She says, "Listen to me and learn some peace of mind: no skill in the world, nothing human can penetrate the future." (Sophocles, 186). When the news of Polybus' death is brought forth, she becomes even more excited, determined to explain that the prophecy was obviously untrue (Boyer, 1). By doing this "she attempts to hint that the oracles - and thus the gods - are false." ...read more.

With each escalating phase of the plot, Oedipus goes from a calm king to a raging maniac; transitioning in small increments until the climax is reached. This is demonstrated by the changing ways Oedipus treats supporting characters such as Creon and Teiresias. He becomes defensive and increasingly agitated. Readers relate to this and as they continue reading they begin to pity Oedipus' situation and fear the consequences of their own similar emotions. Oedipus Rex does two things which characterize it as a play exhibiting catharsis, firstly, the "tragedy deeply affects the spectator by arousing the emotion of pity and fear," and secondly, "purifying and cleansing him of these emotions" (Sous, 628). Oedipus Rex is indeed a play that can be interpreted on many different levels. From the basic classification of Oedipus Tyrannus as a detective story to the deeper investigation of it really being a thesis on humanism versus traditional religious beliefs. As well as being an example of Aristotle's philosophy of catharsis. Countless other analyses have been made about Sophocles' Oedipus Rex; famous philosophers have even based their thinking on it. Heading into the new millennium, these philosophies are still being used. It is a timeless story of the horrors of human ignorance and the power of fate. Oedipus Rex evokes human emotions like many other plays have. Its power is universal and no questions remain about why it has sustained the ages. To this day literary scholars and common readers are still intrigued by the tale of Oedipus the King. ...read more.