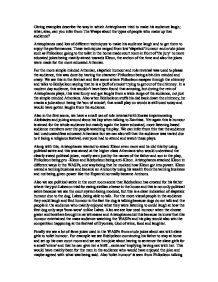 Giving examples describe the way in which Aristophanes tried to make his audience laugh; what, also, can you infer from The Wasps about the types of people who make up that audience?

Giving examples describe the way in which Aristophanes tried to make his audience laugh; what, also, can you infer from The Wasps about the types of people who make up that audience? Aristophanes used lots of different techniques to make his audience laugh and to get them to enjoy the performances. These techniques ranged from low 'slapstick' humour and crude jokes such as Philocleon going to the toilet in the home made court room in front of 'the jury' to more educated jokes being mainly aimed towards Kleon, the archon of the time and also the jokes were made for the more educated Athenian. For the more simple minded Athenian, slapstick humour and role reversal was used to please the audience, this was done by having the character Philocleon being a bit dim minded and crazy. We see this in the first act and first scene where Philocleon escapes through the chimney and talks to Bdelycleon saying that he is a 'puff of smoke' trying to get out of the chimney. ...read more.

Along with this, Aristophanes wanted to attack Kleon even more and he did this by using political satire and this was aimed at the higher class Athenians who would understand the clearly stated political jokes, mostly seen just by the names of the father and son in the play, Philocleon being pro -Kleon and Bdelycleon being anti-Kleon. Aristophanes attacked Kleon in different ways in the WASPs, one way being that he mocked how Kleon got into power. Kleon owned a tanning business and became an Archon by using his wealth from the tanning business and not being given power like the Eupatrid normally became Archons. Also we see political satire in the court room scene that Bdelycleon has created for his father where they put Labes on trial for eating sicilian cheese in the house and this is not only political satire because we see the court system being mocked, but this is a clear indication of slapstick humour due to the dog, Labes, being able to talk. ...read more.

him joke about having to sentence the slave girls for a small 'crime' and that he can give her a 'stiff...sentence' implying having sex with her. This would have mainly been for the men in the audience who would have enjoyed the joke and maybe agreed with what was being said. Also 'toilet humour' is seen from Philocleon talking Lycus, a hero whose shrine stood beside the courthouse that Philocleon attends, and he talks about how he will 'no more to piss or fart behind your shrine' which would have gotten some small laughs from the more lower class watchers. So we can see from all these different types of humour involved in the WASPs that a wide spread audience was Aristophanes aim and that he did entertain the mass audience from the lower class Athenian who enjoyed crude jokes to play on words to the more upper class/educated Athenian who enjoyed the political satire about Kleon but who also enjoyed the simple jokes too. ...read more.