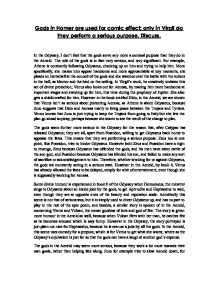 Gods in Homer are used for comic effect where as the gods in Virgil have a more serious role. Discuss.

Gods in Homer are used for comic effect; only in Virgil do they perform a serious purpose. Discuss.

In the Odyssey, I don’t feel that the gods serve any more a comical purpose than they do in the Aeneid. The role of the gods is in fact very serious, and very significant. For example, Athene is constantly following Odysseus, checking up on him and trying to help him. More specifically, she makes him appear handsome and more approachable at key moments, she pleads on his behalf at the council of the gods and she watches over the battle with the suitors in the hall, as Mentor and the bird on the ceiling. In Virgil’s work, he creatively imitates this act of divine protection; Venus also looks out for Aeneas, by making him more handsome at important stages and standing up for him, this time during the prophecy of Jupiter. She also gets a shield crafted for him. However in the book entitled Dido, in the Aeneid, we are shown that Venus isn’t as serious about protecting Aeneas, as Athene is about Odysseus, because Juno suggests that Dido and Aeneas marry to bring peace between the Trojans and Tyrians. Venus knows that Juno is just trying to keep the Trojans from going to Italy but she lets the plan go ahead anyway, perhaps because she wants to see the result of the change to plan.

The gods seem further more serious in the Odyssey for the reason that, after Calypso has released Odysseus; they are all, apart from Poseidon, willing to get Odysseus back home to appease the fates. This means that they are performing a serious purpose. Zeus too at one point, like Poseidon, tries to hinder Odysseus. However both Zeus and Poseidon have a right to revenge, Zeus because Odysseus has offended the gods, and his men have eaten cattle of the son-god, and Poseidon because Odysseus has blinded his son, and failed to make any sort of sacrifice or acknowledgement to him. Therefore, whether working for or against Odysseus, the gods are constantly acting in a serious state. However in the Aeneid, by book 4, Venus has already allowed the fates to be delayed, simply for a bit of entertainment, even though she is supposedly working for Aeneas.

Some divine humour is experienced in book 8 of the Odyssey when Demodocus, the minstrel sings to Odysseus about an inside joke by the gods, to get Aphrodite and Hephaestus to wed, even though they are at opposite ends of the beauty and reputation scale. Admittedly this scene is not that of seriousness, but it is simply used to cheer Odysseus up, and has no part to play in the rest of the epic poem, and besides, a similar story is spoken of in the Aeneid, concerning Venus and Vulcan, the roman goddess of love and god of fire. The story is given more humour in the Aeneid as well, because when Vulcan flirts with her man, he catches fire as he becomes aroused which is very funny. However in the Odyssey, the story portrayed is just plain not nice for Hephaestus, because he is seen as a joke by all the gods. In the Aeneid, this scene uses comedy for a purpose, which is for Venus to get what she wants; where as the Odyssey’s equivalent is just for so that the gods can have a laugh at another god’s expense.

The gods in the Aeneid may seem more serious, because they work a lot more towards their own goals, rather than helping fate along. Juno for example tries to slow Aeneid down, for her own gain, where as Poseidon tries to slow Odysseus down as a punishment. This therefore makes the Odyssey gods seem more relaxed because they only intervene when mortals need them to, where as Aeneid gods intervene when immortals want to. Juno is the main cause of the serious reputation of the gods. She manipulates Aeolus to send a storm to slow Aeneas down, as well as attempting to delay him in Carthage, and sending Allecto to cause a war in Italy. This is all because she doesn’t want the Trojans to form Rome and destroy Carthage. Juno and Venus both show how serious the gods are in the Aeneid. Poseidon and Zeus only interfere to attack Odysseus because they felt they have been wronged; the Aeneid goddesses are working for their own personal gain.

In summary, I feel that the gods are more serious about fulfilling fate in the Odyssey and there are less scenes involving gods and comedy, however where there are such scenes, they don’t seem to serve a purpose, where as when comedy is used concerning the gods in the Aeneid, it serves a purpose; for example, when Venus is flirting with her husband and he catches fire, she’s flirting because she wants something; the comedy has a structure to it. In both poems, the gods serve a serious purpose; they just perform it with more light heartedness in the Aeneid. None of the gods in the Odyssey are used simply for comic effect. The all play a role in which they hinder or help Odysseus, and so no I do not believe they are used for comic effect, even though they may perform less serious acts than the Aeneid immortals.