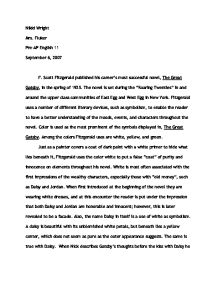 Nikki Wright Mrs. Fluker Pre-AP English 11 September 6, 2007 F. Scott Fitzgerald published his career's most successful novel, The Great Gatsby, in the spring of 1925. The novel is set during the "Roaring Twenties" in and around the upper class communities of East Egg and West Egg in New York. Fitzgerald uses a number of different literary devices, such as symbolism, to enable the reader to have a better understanding of the moods, events, and characters throughout the novel. Color is used as the most prominent of the symbols displayed in, The Great Gatsby. Among the colors Fitzgerald uses are white, yellow, and green. Just as a painter covers a coat of dark paint with a white primer to hide what lies beneath it, Fitzgerald uses the color white to put a false "coat" of purity and innocence on elements throughout his novel. ...read more.

Fitzgerald's use of white is simply a covering up of reality to later show that things are often more than what they seem at first glance. White is used in, The Great Gatsby, to cover reality, whereas yellow is used to reveal the truth. As previously mentioned, Daisy and Jordan are first seen in the novel wearing white dresses, but as the story progresses and Fitzgerald reveal more about their true motives, their clothes change from white to yellow. This transformation is significant because it allows the reader to see that Daisy is full of corruption. Just as the core of a daisy is not as unblemished as its striking petals, neither is the heart of Daisy as innocent as it may seem to others. Fitzgerald also repeatedly uses the color yellow to describe the car that causes Myrtle's death. ...read more.

Green is also used in reference to hope through Nick with his green train ticket showing Nicks hope to find a normal life back home. Envy is also a meaning of green in, The Great Gatsby. It is used through Gatsby to show that he is enormously jealous of Tom because he has the one thing, Daisy, which Gatsby can never attain. Green is a color of great importance to understand the mysteries of characters, especially Gatsby. F. Scott Fitzgerald mastered the use of symbolism through color in his career's defining work, The Great Gatsby, to enhance the reader's image of characters and situations. Through colors, element can be defined in subtle ways to readers who pay close attention to detail. They also add emotion to events. In the novel Fitzgerald uses white as deception, yellow as corruption, and green as hope and envy. The colors allow a better understanding of the main characters and situations. ?? ?? ?? ?? ...read more.