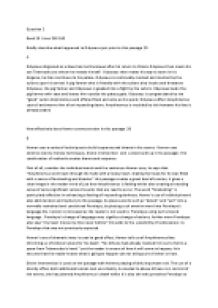 ﻿Question 2 Book 18 Lines 152-168 Briefly describe what happened to Odysseus just prior to this passage 10 A Odysseus disguised as a slave has met Eumaeus after his return to Ithaca. Odysseus then meets his son Telemachus to whom he reveals himself. Odysseus then makes his way to town in his disguise, he then continues to his palace. Odysseus is continually mocked and insulted by the suitors upon his arrival. A pig farmer who is friendly with the suitors also insults and threatens Odysseus, the pig farmer and Odysseus is goaded into a fight by the suitors. Odysseus beats the pig farmer with ease and leaves him outside the palace gate. Odysseus is congratulated by the ?good? suitor Amphinomus and offered food and wine as his spoils. Odysseus offers Amphinomus council and warms him of an impending doom, Amphinomus is troubled by this however his fate is already sealed How effectively does Homer convey tension in this passage 20 B Homer uses a series of techniques to build suspense and drama in his scenes. Homer uses emotive words, literary techniques, divine intervention and a slow build up in his passages this combination of methods creates drama and suspense. First of all, consider the individual words and the sentences Homer uses, he says that ?Amphinomus went back through the halls with a heavy heart, shaking his head; for he was filled with a sense of foreboding and disaster? this passage creates a great deal of tension, it ...read more.

Secondly we see how she controls Penelope , Penelope says ?my heart moves my like never before? this is an typical move by Athene, she indiscreetly places feels and thoughts into the mind of mortals to lead them to carry out tasks or undertakings she deems important, this is a very typical move by Athene. Throughout the Odysseys Athene's interactions with mortal is not very direct, she appears in dreams, thoughts or in the guise of a mortal (Odysseus and Telemachus interaction with her sometimes proving an exception). Telemachus's first meeting with Athene she is in the guise of a foreign prince whilst she appears to Nausciaa in a dream and she takes the semblance of a young girl when helping Odysseus find the palace of Aknioos and Arete. This sort of interaction is typical , she is helping her hero?s to their goal without being too brash or obvious. One significant exception is Athene's conversation with Odysseus after his arrival on Ithaca ? the two speak to each other almost as equals showing each mutual respect and friendship The reasoning behind Athene's actions may be two fold, firstly a story where a god/dess who simply gives the protagonist what they desire isn't particularly exciting. Secondly Athene's actions may be due to the relationship the gods have with mortals and each other. Odysseus is hated by Poseidon , Athene's uncle ? if she were to openly assist Odysseus she runs the risk of enraging her uncle further. ...read more.

The gods play a significant role in this as during the Odyssey they are keen to see justice prevail in a number of different scenarios. The main good vs bad encounter is Odysseus and his ordeal with the Suitors, Athene assists Odysseus during the battle with the suitors as well as prior ? she wants to ensure that justice is carried out and that the offending suitors suffer. This a is significant point the gods add legitimacy to Odysseus and his quest. Other examples of this are apparent, the death of the crew after eating the Sun gods flock, the swift death of Menelaus's murder and also Odysseus who suffers at the hands of Poesidon for showing too much arrogance after his blinding on the Cyclops . Athene's constant help along with assistance from Circe and Ino and other that Odysseus receives further legitimises his heroic status. By assisting Odysseus the gods have shown that he is worthwhile that gods only help people who are worth it - this continued assistance gives credibility to Odysseus cause as a hero. By giving Odysseus credibility he is on par with hero's in the Illiad such as Ajax and Aeschylus thereby adding significance to the plot and narrative as a whole It?s clear that the importance of the gods is key to the entire poem, they add credibility to the Odysseus and his struggle whilst moving the plot forward, the play a significant role one of the poems major themes and also offers and important cultural background to the narrative. 84/100 TOTAL MARK . ...read more.