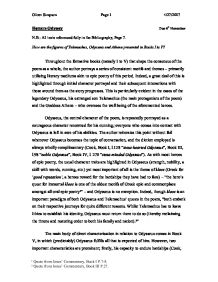 How are the figures of Telemachus, Odysseus and Athena presented in Books I to V?

Homers Odyssey Due 6th November N.B.: All texts referenced fully in the Bibliography, Page 7. How are the figures of Telemachus, Odysseus and Athena presented in Books I to V? Throughout the formative books (namely I to V) that shape the consensus of the poem as a whole, the author portrays a series of consistent motifs and themes - primarily utilising literary mediums akin to epic poetry of this period. Indeed, a great deal of this is highlighted through initial character portrayal and their subsequent interactions with those around them as the story progresses. This is particularly evident in the cases of the legendary Odysseus, his estranged son Telemachus (the main protagonists of the poem) and the Goddess Athene - who oversees the well being of the aforemented heroes. Odysseus, the central character of the poem, is repeatedly portrayed as a courageous character renowned for his cunning; everyone who comes into contact with Odysseus is left in awe of his abilities. The author reiterates this point without fail whenever Odysseus becomes the topic of conversation, and the diction employed is always wholly complimentary (Cook, Book I, l.128 "stout-hearted Odysseus", Book III, l.98 "noble Odysseus", Book IV, l. ...read more.

to the suitors (Cook, Book I, l.414-416 "I put no trust in a message, wherever it comes from, And I give no heed to any divination my mother Might ask of a diviner, calling him to the Hall") - which is full of Odysseus' fabled guile. However, these encouraging signs are directly conflicted with his immature frustration in his emotive release after his encounter with the suitors (Cook, Book II, and l. 80-81 "so he spoke, in anger He threw the sceptre down on the ground, bursting out in tears"). This culminates in the presentation of an emotively vulnerable Telemachus at the beginning of the poem - a man unable to supersede or detach himself from the father's memory, which in turn proliferates a tension between him and his mother (Penelope). This is evident in their numerous exchanges, but predominantly in his conversation with Athene (Book I) - in which he refers to her state of indecision with very disparaging tones (Cook, l.249 - 251 "She neither refuse the hateful marriage nor can she make an end of it"). Yet another example not only of Telemachus' confused nature that he seeks to blame those around him for a wholly unwarranted situation but of his immature frustrations. ...read more.

and, with her frequently referenced 'divine plan', give the narration both a piety and omnipresent overview to which only a God would be privy (which in turn aids the narration of the story). In summary, there are a great deal of motifs and themes highlighted in the portrayal of these respective characters. Not only do they reiterate the consensus of the poem (predominant in Athene's disguises or Telemachus' quest for identity and belonging) but also serve to underline the consistent paradigms of epic poetry (Odysseus' cunning and guile, Athene's divine interventions, etc.). In respect of the characters themselves, the opening books function to give concise summaries of them, which are later expanded on as the story progresses. Odysseus is repeatedly proven to be a great hero (albeit with a human side that longs to reunite his estranged family), whilst Athene is revealed to be a wise and cunning Goddess that serves to give the poem a sense of gravity (through the inclusion of the council of the Gods) and lends omnipresence to the narration. The majority of the characterisation revolves around the complex nature of Telemachus, who initially feels incapable of assuming his father position yet eventually yields to his destiny (albeit through Athene's help). WORD COUNT 2,000. ...read more.