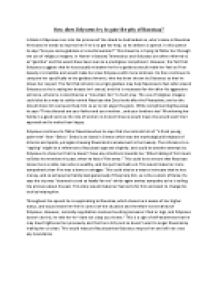 How does Odysseus try to gain the pity of Nausicaa?

﻿How does Odysseus try to gain the pity of Nausicaa? In Book 6 Odysseus runs into the princess of the island he had landed on, who?s name in Nausicaa. He knows he needs to impress her if he is to get her help, so he delivers a speech. In this speech he says ?Are you some goddess or a mortal woman?? This shows he is trying to flatter her through the use of religious imagery. In Homer?s Odyssey Telemachus and Odysseus are often referred to as ?god-like? and this would have been seen as a prestigious compliment. However, the fact that Odysseus suggests that he has actually mistaken her for a goddess would make her feel as if her beauty is incredible and would make her view Odysseus with more kindness. ...read more.

While complimenting Nausicaa he says ?Thrice blessed are your father and your mother...and your brothers too? Mentioning her family is a good tactic as the role of women in Ancient Greece would mean she would want their approval and to make them happy. Odysseus continues to flatter Nausicaa when he says that she reminds him of ?a fresh young, palm-tree? from ?Delos.? Delos is an island in Greece which was the mythological birthplace of Artemis and Apollo, yet again showing Nausicaa his amazement at her beauty. The reference to a ?sapling? might be a reference to Nausicaa?s age and virginity, and could be another attempt by Odysseus to show her that he doesn?t have any intentions towards her. ...read more.

He says the trip was ?doomed to end so fatally for me? which again evokes sympathy as he is telling the princess about his pain. This story would make her feel sorry for him and want to change his luck by helping him. Throughout the speech he is supplicating to Nausicaa, which shows he is aware of her higher status, and would make her feel in control of the situation and therefore not be afraid of Odysseus. However, normally supplication involves touching someone?s feet or legs, and Odysseus doesn?t do this, he tells her he ?dare not clasp your knees.? This is a sign of self-awareness that he may have frightened her previously and that he is dirty and so doesn?t want to anger Nausicaa by making her unclean. This would reassure Nausicaa that Odysseus respect her and will not cross any boundaries. ...read more.