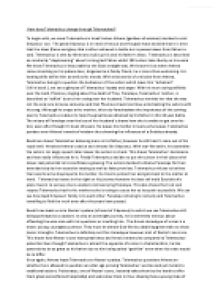 How does Telemachus change through Telemachaei?

﻿How does Telemachus change through Telemachaei? To begin with, we meet Telemachus in book1 when Athena (goddess of wisdom) decided to visit Odysseus? son. The great Odysseus is in need of rescue and the gods have decided that it is time that the kleos (fame and glory that is often achieved in battle but is passed down from father to son). Telemachus is sent by Athena to build up his and his father?s kleos. Telemachus is described as constantly ?daydreaming? about his long last father whilst 108 suitors take liberty on his xenia. We know Telemachus is favourable by the Gods straight way. We know this as when Athena comes knocking on his palace door, disguised as a family friend, he is more than welcoming. His hosting skills define him as well as his morals. With wise words of a mission from Athena, Telemachus beings to question the behaviour of the suitors which leave him ?ashamed?. Still in book 1, we see a glimpse of Telemachus? loyalty and anger. With his mum crying selfishly over the bard, Phemius, singing about the death of Troy. ...read more.

The suitors decided to blame Penelope for their extended stay by her excessive teasing as well as false promises. Telemachus refuses to believe their words as he stays loyal to his mother. He tries to protect her and gets back to the matter at hand. Telemachus leaves in the night on his journey however he does tell maid Eurycleia his plans. Sworn to secrecy she is unable to tell worrying Penelope. This also shows the trust and respect Telemachus has for his mother as he is trying to cause her as less pain as possible. We can see how loyal Odysseus? family is to each other: Penelope refusing to remarry and Telemachus travelling to find the truth even after the years have passed. Book three leads us into Nestor?s palace (a friend of Odysseus) to which we see Telemachus still being portrayed as a coward. In only an overnight journey, he is extremely nervous about offending the wise man with his questions or insulting him. The Greek stereotype of a man is a brave, young, courageous person. ...read more.

Telemachus is relying on Athena to help him without fail. By book four we start to see kleos in action. Upon meeting Menalus (an old king who also fought beside Odysseus in Troy) we see that Athena has left Telemachus. This shows how braver Telemachus is as he starts to become independent as he is ready to meet Menalus. Peistratus is still accompanying Telemachus and is the first to speak to Menalus. His role is to support Telemachus and begins to state why they are there as well as introducing the King to Telemachus. We see Telemachus? ?heroic? stature coming through as he refuses Menalus? glorious gift. With charm flowing from him, he takes the news of his father in his stride as he hears about Clypso?s island. Overall, Telemachus changes from a coward who spent 20 years daydreaming about a father he has never met to a strong god-like protagonist. Although he is not fully a man yet nor a hero, he is showing true potential as he is building his kleos up. He will become like his father if his progress continues. Telemachus is being turned into a man with the help of Athena and family friends. ...read more.