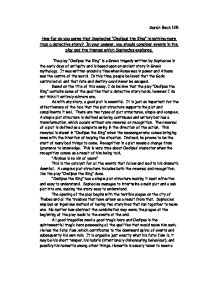 How far do you agree that Sophocles &quot;Oedipus the King&quot; is nothing more than a detective story? In your answer, you should consider events in the play and the themes which Sophocles explores.

Sarah Beck 12R How far do you agree that Sophocles "Oedipus the King" is nothing more than a detective story? In your answer, you should consider events in the play and the themes which Sophocles explores. The play "Oedipus the King" is a Greek tragedy written by Sophocles in the early days of antiquity and is based upon an ancient story in Greek mythology. It was written around a time when Rome was in power and Athens was the centre of the world. In this time, people believed that the Gods controlled all and that fate and destiny could never be escaped. Based on the title of this essay, I do believe that the play "Oedipus the King" contains some of the qualities that a detective story holds, however I do not think it entirely mirrors one. As with any story, a good plot is essential. It is just as important for the effectiveness of the tale that the plot structure supports the plot and compliments it well. There are two types of plot structures, simple and complex. A simple plot structure is defined as being continuous and unitary but has a transformation, which occurs without any reversal or recognition. The reversal of a plot is defined as a complete swing in the direction of the action. This reversal is shown in "Oedipus the King" when the messenger who comes bringing news with the intention of helping the situation. Instead, he proves to be the start of many bad things to come. ...read more.

We see how Oedipus has changed and we see the dramatic irony of how he actually is alike Tiresias now, the blind seer prophet. Earlier in the play, when Tiresias revealed the truth to Oedipus, he did not believe it and called Tiresias blind. The irony here is that sight has two meanings. Oedipus was blessed with the gift of perception, as he was the only man who could solve the Sphinx's riddle, yet he could not see what was right before his eyes. This shows him as blind to the truth. Yet Tiresias, an old, blind man shows his presence in the play to be very important. He foresees Oedipus' own future causing Oedipus to mock him, showing even more dramatic irony to the audience. Tiresias is a man who understands the truth without the use of his sight; later Oedipus is quite the contrary. He is a sighted man who is blind to see the truth right before him. Further on in the play, Oedipus switches roles with Tiresias, becoming a man who sees the truth and loses his sense of sight. The theme of sight and blindness is introduced again, ultimately ending in dramatic irony as Oedipus will eventually end up blinding himself. It is true that the audience know Oedipus is the murderer, proving it not to be a detective story. However, as the Gods and fate were against Oedipus from the start, is it really a murder that he committed or could it be manslaughter? ...read more.

There are views about the God's, given to us by characters in the play. It shows their contact with the characters through oracles and how they depend on the meaning of them. Could this be compared to how we compare our lives with the horoscopes we read? However vague and ambiguous the horoscopes are, we aim to make the events fit to them. This can lead to problems though, as shown by the character Jocasta, who shows that having guidance from a God or an oracle doesn't always help you in your future. Due to the way that "Oedipus the King" seems to incorporate all the things I have discussed, it would seem that this play is an example of Greek tragedy at its best. The play stirs up the emotions and rouses sympathy for the characters and its protagonist. It motivates the audience and readers by arising questions, and uses devices that utilise the suspense and the effect of dramatic irony. It is true that many of the aspects of this play could maybe conclude in it being classed as a detective story. Although there are some points that could class it as one I do not consider it entirely a detective story. This is due to the fact that the audience is already aware of Oedipus' fate at the start of the play; they can already see the dramatic irony that Oedipus cannot see. I think that Sophocles is trying to engage his audience, trying to make them wonder and question aspects of the play. He indeed enforces some important lessons, but overall I think that "Oedipus the King" is much more than just a detective story. ...read more.